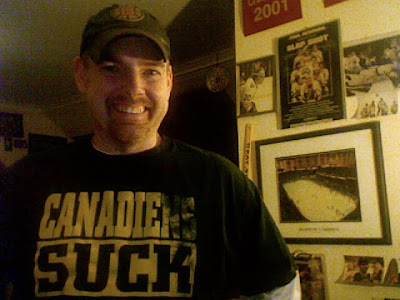 I have worn 289 t-shirts since this one: http://bit.ly/habssucktshirt, and I still think the Canadiens suck! I wore this one (which I bought outside the Fleet Center years ago) today because my beloved B's are playing the "Hated Habs" tonight...

I am a huge fan of their captain, BC grad Brian Gionta, but they still suck.

They just scored on a penalty shot, but they suck.

They have only 8 fighting majors this season…‘nough said.

The best thing about the B’s/Habs rivalry is that (no matter what they say), the players seem to be into it just as much as the fans:

Hoping the B’s can comeback tonight…