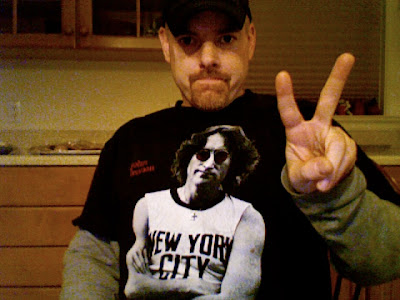 I was only 6, but I remember. It was the morning after Mark Chapman had shot John Lennon, and my mom as really, really sad. She was the reason I already knew all the words to many Beatles songs, and why I was one of only two in my first grade class who knew who John Lennon was. It was Todd D. and I, and we were trying to explain to our classmates who The Beatles were and why it was a sad day for a lot of people.

I’m glad when it happened I was too young to realize how tragic Lennon’s murder was. Although some might argue that Pearl Jam and Eddie Vedder aren’t as important/influential/talented as The Beatles and John Lennon, I think the equivalent for me today would be if someone shot Eddie Vedder – something I don’t want to even imagine happening.

I will never understand why it seems that the ones who stand for peace, understanding, and making the world a better place are the ones that people want dead. There was JFK, MLK, and RFK. Even though John Lennon wasn’t a political figure, he stood for many of the same things that all of those men preached. Like I quoted for my John Lennon “Imagine” shirt (http://davestshirts.blogspot.com/2010/03/t-shirt-82-imaginejohn-lennon.html), “Imagine all the people living life in peace…”

Thirty years ago, the world lost one of its best songwriters. John Lennon was a peacemaker, dreamer, and inspirational figure. The world would be a better place if people lived by the words he wrote and his songs in part were inspiration for this blog.

Right now, we are a world at war. We fight over oil, religion, and possessions. We kill over who owns what and who thinks their religion is better. John Lennon was right: all the wars and all the fighting could be over if enough people wanted it (http://davestshirts.blogspot.com/2010/06/t-shirt-170-war-is-over-if-you-want-it.html).

Thank you for all the songs and inspiration, John. I hope wherever you have been for the last 30 years that you have been writing songs, and I get to hear them someday.