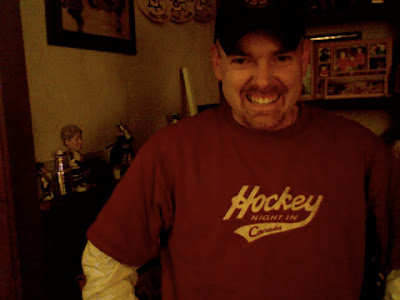 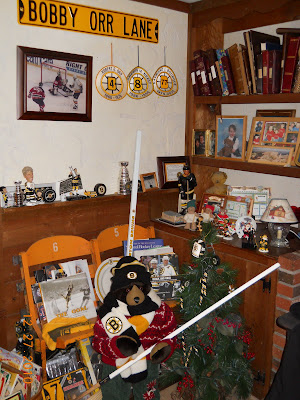 First of all, thanks to my awesome mom for getting me this t-shirt! (I don’t think they sell it anymore, but you can see others here: http://bit.ly/hnicshirts)

This is me standing near the “Bruins Corner” in my parents’ house. Do your parents have a Bruins Corner? I didn’t think so. Oh, they do? Does it have a picture your father took of the last goal scored at the Boston Garden autographed by the player (Adam Oates) that scored it? This one does. Pretty cool, I know. I’ve mentioned it before and I say it again proudly: I am from a hockey family…

Yes, we McGraths love our hockey and we love our Boston Bruins. Even though I wasn’t there, I’m sure both of my parents (and perhaps my sisters) were yelling with joy after Mark Recchi scored the game winner with less than 20 seconds left. We don’t hold back when it comes to our beloved B’s.

Even though most of my career BWMs (Bruins Watching Minutes) have taken place at my parents’ house with family, many of my career HPMs (Hockey Playing Minutes) have been with people outside my family. Even though I never played in organized leagues growing up, I loved to play and I played as often as I could. I think my junior year in high school I played pond hockey 2-3 times a week from December through the end of February. And I would venture to say that 95% of those times, I was playing with one of my best friends, Andy.

Even though our “Pond Hockey Days in Massachusetts” weren’t going to get us scholarships to BC or Harvard, they were always great times (okay, there were a couple of times Andy had to break up "chippiness" between me and a Grafton kid) and they were a big part of starting what I know is a lifetime friendship. And I bring up Andy today because it was one of the rare days of the year that I actually got to hang out with him. I wish it could be more, but I take what I can get…

Andy was #2 in our high school class. He wasn’t #1 because that guy had one more A+ than him. I personally think Andy would have made a much better Valedictorian (he not only got A’s, he rowed crew, ran track, could play guitar, and was (dammit) better than me at hockey!). So, he’s “wicked smaht”. He went to Harvard, got his PhD at Harvard, and is now a professor of anthropology at the University of California. Oh yeah, he also published this book: http://amzn.to/andysbook

But Andy is not a brainiac with no social skills. The guy is hilarious, witty, and one of the few who laugh with me when others might shake their heads and think “well at least he’s entertaining himself…” He’s also one of the kindest people you will ever meet. He supported me through my cancer and struggles with drinking, and is always there for me if I need someone to talk to. Definitely someone I’m lucky to have in my corner.

That’s the great news. The not so great news is that I only get to see Andy about once a year. His schedule only allows him to come back to Massachusetts during the holidays, and for most of that time (understandably) he is with his family. I have visions of the day I can afford to fly out to California (or Oregon to see my friend Glen) on a weekend whim, but for now those are just daydreams. And I’m not one to harp on the negative.

I hung out with Andy today, and it was great (as always). I love the guy like a brother, and cherish every minute we get to see each other. We saw Tron today, and one of the themes of the movie was trying to create the “perfect world”. My vision of a perfect world has many things, and one of them is enough hockey rinks so you can play anytime anywhere. The other is a world where I get to see my close friends more often (and yes, play hockey with some of them!). No matter what world I live in, I know I’ll have Andy as a close friend. For that I am very thankful, no matter how many times I get to see him. Love you, man!