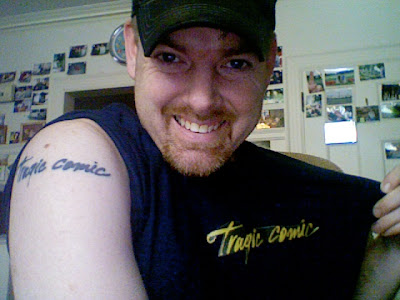 Carl and I didn’t meet until our senior year of college. As fate would have it, we were taking the same psychology practicum and ended up sitting near each other. We hit it off so well that sometime in October one of our classmates asked us how long we had been roommates. That was (ugh) 15 years ago, and I’ve been very lucky to have Carl in my life ever since…

Carl and I share similar tastes in many things. We like the same sports teams, love many of the same TV shows and movies, and (as I’ve mentioned before) enjoy the “occasional” round of video game hockey. Our musical tastes overlap quite a bit, but when it comes to Extreme and Queensryche, it usually just ends up with circular arguments about who has the better guitar player (answer: Nuno Bettencourt from Extreme) or who has sold more albums (answer: Queensryche, but using that argument the Bee Gees are better than both Queensryche and Extreme). We just agree to disagree, and we have fun doing it (And yes, Carl has a Queensryche tattoo and I have a Tragic Comic tattoo).

The one thing Carl and I do the most together is laugh. We make fun of each other, trash talk during video games, and bring up funny and/or embarrassing moments from our past. When one of us is down, the other one brings him up. Even when Carl is helping me with legal issues (which he has done on numerous occasions including a landlord that tried to screw me over), we laugh our way through it. And yeah, sometimes it’s just me laughing at myself and Carl asking “What’s wrong with you?”, but I’m okay with that.

So, onto “Tragic Comic”: Extreme’s third album III Sides to Every Story came out just as I was finishing my last hospital stay for cancer. I remember my older brother letting me borrow his CD and Discman so I could have a listen as the last of my cancer-related IVs was stuck in my arm. After I returned to BC, there were two albums I began listening to just about every day: III Sides and Denis Leary’s No Cure for Cancer. There must be something about being that age and going through what I did, but these became two of my favorite albums of all time. As my freshman year went on and I was introduced to alcohol and more BC females, “Tragic Comic” became my favorite song on III Sides. I not only related to the song lyrics, but I identified strongly with the title itself. And even though my drinking didn’t always bring out my “comic” side, I still did my share of laughing.

Since that freshman year, Tragic Comic has become more than just a song to me. It is in my email address, the title to my first book of poetry (http://amzn.to/poemsfromatragiccomic), and is now permanently part of my arm. It really is part of my philosophy. Laughing got me through cancer, it gets me through Crohn’s, and it is what helps every guest at Hope Lodge. If you don’t have humor, I don’t know how you handle any of life’s challenges. I am re-reading Viktor Frankl’s book Man’s Search for Meaning (http://en.wikipedia.org/wiki/Man's_Search_for_Meaning) right now, and even he and the other concentration camp prisoners had humor in their lives (If you haven’t read it, I highly recommend checking it out – it will give you perspective on what true suffering is and how thankful you should be even when life throws you crap). I’m not sure if this is what Extreme meant by Tragic Comic, but I am one and to me it means trying to laugh no matter what. Luckily for me, my family and friends (like Carl) make laughing a very easy thing to do…

were found dead on their arrival

The words, I said,

inserted foot in my mouthful

So when, we dance,

My lead it ain't so graceful

JUST CALL ME A TRAGIC COMIC

CAUSE I'M, IN, IN LOVE WITH YOU

And when, we dine,

I forget to push in your seat

I wear, the wine,

spilling hearts all over my sleeve

A stitch, in time,

proposing down on my knees

(Splitting between the seams)

JUST CALL ME A TRAGIC COMIC

CAUSE I'M, IN, IN LOVE WITH YOU

Nobody, can know the,

Nobody, can know the,

trouble I, get into,

when I'm with you