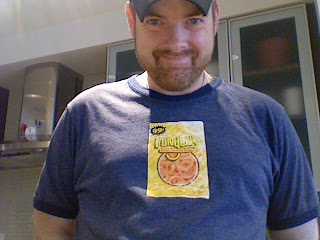 Sometimes, I like to make shirts I think no one else will have…one scan and an iron-on later, I had this Funyuns shirt. This shirt reminds me of two things. One, it reminds me of a story from The Onion: http://www.theonion.com/articles/funyuns-still-outselling-responsibilityuns,383/ .

It also reminds me of the Summer of 1994 when I was a counselor at Med-O-Lark camp in Washington, ME (http://www.medolark.com/). Because I put myself on a special diet that summer, my “dinner” on nights I could leave camp most often consisted of Funyuns and Mello Yello (A great combination for my Crohn’s).

But, my junk food diet was the least of my worries that summer. My time at Med-O-Lark happened in the middle of my two year relationship with alcohol, which usually made might nights off an adventure…

One night in particular (which I blacked out and was told about later), I found myself facedown on the floor holding an empty pitcher. Instead of trying to get up, I smashed the pitcher on the floor. The owner of the bar saw it and casually said, “I think he’s had enough.” There were nights I don’t remember, nights I crawled into my bed less than an hour before wake up call, and nights people had to talk me out of trying to befriend the group of skunks that lived at camp.

Luckily, I met a lot of great counselors and campers amidst my struggle with drinking. I gave them a lot of reasons to say “f- that drunk a-hole”, but most of them (Gary in particular) took care of me and made sure I got back to camp safely. Most of them had hearts big enough to see past the surface of my behavior and into the person I wanted to be. In case I have never said it to this group of people before, I want to tell you all that I’m sorry if my drinking caused you any grief and thank you for every time you put up with me during this hard part of my life.

I also don’t want to paint the picture of this summer being an all-out binge-fest whenever the counselors were out. We did know how to party (although true to the Bosstones song, I didn’t), but we also had fun times working at camp and outside of camp at non-bar locations. We came up with hilarious skits to introduce the campers to different events, we had awesome talent shows (one of the first places I recited my poetry in public), we (well, Gary, Sara, and I) quoted Fletch whenever passing each other (For God, don-don!), and we laughed a lot . We went to Portland, hung out at Crystal Lake (Luckily, a Jasonless one), and camped out in Acadia.

One of the most hilarious things ever happened after all the campers had left, and the counselors had a few days to close the camp up for the winter. Clearly the stress of trying to get everything done in time had taken over, and a group of counselors and I decided we should start a softball game…using all of the fruit that had gone bad. If you’ve never seen a bad apple smashed by an aluminum bat, I highly recommend trying it at least once.

Although one of my “drinking days regrets” is knowing I would have had a better time this summer without drinking, I know I just wasn’t ready to quit back then. Today, I am glad to say I have reconnected with a lot of these Med-O-Lark people on Facebook and that coming up this May it will be 15 years since I have had a drink. Now, I’m off to find Funyuns and Mello Yello…