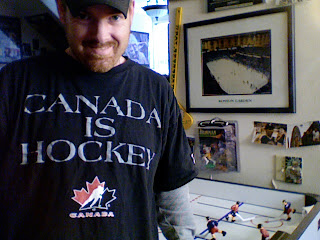 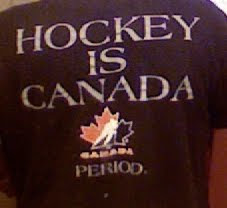 My name is Dave and I love hockey.

Sometimes I think I was born in the wrong country.

If I could find the people, I would play hockey every day.

I will watch any hockey game that is on TV, no matter what the level. I remember a roommate walking in and asking me what the f- I was watching. It was a replay of a Waltham High hockey game.

I have 11 hockey jerseys: Boston College, Bruins, Bruins Winter Classic, Team USA, Team Canada, Team Ireland (yes, Ireland has a national hockey team, see here: http://www.iiha.org/ ), St. John’s Maple Leafs, Sunnyvale (Trailer Park Boys #420…my parents did not know the significance of the number when they bought this for me, thanks Mom and Dad!), University of Vermont, Charlestown Chiefs (Slapshot), Hope Lodge (one I made), (and yes, I will give away some of these, too!)

My friend Matt and I have a lifelong series going in the old USA-USSR (or sometimes it’s a USA-CANADA), bubble hockey. I think the series is tied at 52-52 (I have a much cheaper version of this game which is pictured with me).

Speaking of USA-Canada, I have noticed when The Bruins play Canadian teams (especially The Hated Habs), some fans bad mouth Canadians in general. There has been booing during the Canadian national anthem (which is better than the US one in my opinion), and just this year I saw a sign that said “I’d rather be a silver medalist than Canadian”. Freakin’ idiots! Not only are you insulting the country that gave us hockey, you are insulting over HALF of The Bruins!

Although I have shared this story before, it encapsulates my love of hockey…two years ago, I had to go back into the hospital for my Crohn’s Disease. I had a vicious stomach ache all day and then at night, I couldn’t stop throwing up. My awesome father drove into Worcester at about 3:30 in the morning and took me to the hospital. After being in the ER for a few hours and a few tests, the doctor came in and gave me the low down. He said that the place where I had my original surgery for Crohn’s (they took out a foot and a half of my intestines when I was 14) had either scarred up or my intestines had twisted over themselves and caused a “back up”…niiiice! He told me I definitely was going to be admitted. He explained there was a chance I would need more surgery, but more tests and time would give them the answer. After going over the possibilities, he asked me if I had any questions. My question: “Am I going to be able to watch The Bruins game tonight?”. He laughed and couldn’t believe that’s what I wanted to know. But it was. And I did watch the game…it was game 6 against the Canadiens in the 2008 playoffs…an instant classic.

Another medical-hockey story started when I got hit by a Ford Bronco junior year of college (see story here: http://davestshirts.blogspot.com/2010/02/t-shirt-56-national-sarcasm-society.html ) It was early November and I broke my clavicle. My brothers, friends, and I had started a tradition in high school of playing a street hockey game the Friday after Thanksgiving, and about a week before this game I had a clavicle check up with my doctor. I asked him if he thought I would be able to play in the game and he said something to the effect of “Absolutely not”. I then suggested that I could only play goalie, and he said “No way”. I pleaded with him that I would put a bunch of padding over my clavicle… “Nope”. So I had to re-question him with what I knew. I said, “Okay, I am playing a hockey game next week, what would you suggest I do to protect myself?” I don’t think he was amused.

One more thing about hockey: My awesome mother knows more about it than I ever will. And it is because of the superstitious way of viewing hockey (make popcorn after the 2nd period, if the Bruins score, the seat you were sitting in is yours the rest of the game, etc.) she passed along to me I will be going out to buy peanuts and M&Ms in between periods tonight. Holy shit, Wideman just tied the game!