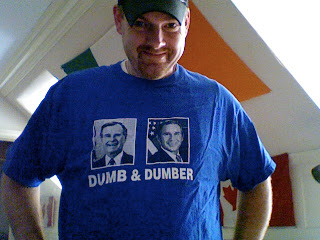 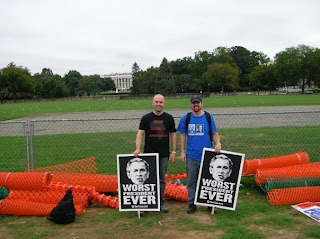 I have had this shirt since 2003 or 2004. Say what you want about Obama, health care, and socialism, you will NEVER convince me that “W” is not an idiot. I tried to wear it when I voted in the ’04 presidential election, but some nice old man at the school in Westboro said it was against the rules. I nicely asked him if he could show me where it said that and the poor guy took out this huge regulations book and was flipping through it, trying to show me the rule. It said something like “No campaign material within 100 feet of the polls”. As I left to get a sweatshirt out of my car, the police officer on duty at the school jokingly told me my shirt had him convinced. I also wore it when my friend Glen and I (see picture) went to an anti-war rally in DC back in Septemeber of 2005, and to the 2008 election polls. I wear it today because I am on my way to New York to see The Daily Show with three of my favorite people…woo hoo!

Your association makes you

My least favorite letter by galaxies,

Your stubbornness puts you at the end,

And against the alphabet’s majority.

You cowardly veto any whiteout

That suggests you made a mistake,

To their undeserving ink-spilled grave.

You’re so pathetic, you rely on another character

To even say your name,

Double-U, what comes to mind

Is unintelligently unable to unify

For even one day.

Your mispronunciations and isms

It’s tragic to think you represent me

When you send your stuttering phrases to the world,

My un-ode to you, W, and the stolen title you don’t deserve:

Wrecked, writhe, why, when?

And the whole planet is counting down…