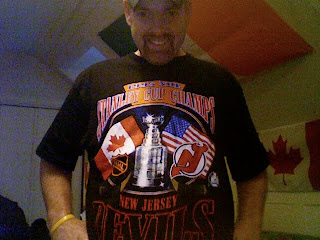 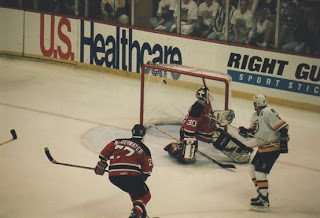 This shirt is a donation from my friend Christi (thanks again!), and I knew I had to wear it before the hockey season started. I hope seeing me in anything other than a Bruins shirt wasn’t too shocking to anyone!

This shirt reminds me of May 1995, and the first round playoff series between the Bruin and Devils. The series started on May 7, 1995 and the Bruins lost 5-0. I was in the middle of finals and at the peak of my problem drinking, and consumed everything alcoholic that was in the apartment. Like the Bruins had played, I just didn’t care anymore.

The next day, my friend Drew came to the rescue. I hadn’t thrown up that much and after seeing all the empty bottles, Drew was pretty sure I had alcohol poisoning. He took me to the hospital, and they gave me charcoal to soak up the rest of the alcohol. My parents came to see me in the hospital and although I had already given them plenty of reasons to yell at me because of my drinking, they only showed support and love. My doctor and parents both wanted me to go to rehab (which I had been to a year earlier), but I had no desire to. I did realize one thing: If I didn’t want something like this to happen again, I had to stop drinking.

With a bad attitude, I told my parents I would go to McLean’s, but wasn’t going to put any effort into recovery. I think I was more pissed at myself than anything else. When we got there, my attitude changed. I realized I had to try and get something out of it while I was there, and told my mom everything was going to be okay. Unfortunately, the Bruins’ fate was out of my control.

As I continued my rehab, the B’s fell down 3 games to 2. My father came to visit me one day with really bad news that reminded me hockey is just a game (yeah, I said it). While I was in the hospital getting treated for my alcohol poisoning, a friend of mine had passed away. His name was Justin, and I had met him three years earlier while we were both getting treated for cancer. He was a great, bright, funny kid and we would request to be in the same room when we were in the hospital at the same time. Justin had asked his mother to call me so he could see me when things started looking bad, but I was too busy being stupid and selfish in the ER. Shocked by the news, I threw the closest chair I could find and retreated to my room at McLean’s.

I knew I would never be able to forgive myself for not being there for Justin, but I also knew that I couldn’t let drinking prevent me from being there for someone again. At one of my inpatient AA meetings, another struggling alcohol abuser said something that made my future with drinking certain. The 30something-year-old said “My name is _______, and this is my 8th time in rehab.” I told myself I never wanted to say that, ever. And I knew there was only one way that was going to happen: never drink again. And, I haven’t.

On May 14, I was one week into rehab and the Bruins were playing the Devils in game 5. It was the last official hockey game at the Boston Garden, and the Bruins lost 3-2. Adam Oates score the last goal (see picture by my dad), and the Devils advanced to the next round. Although the Bruins (like they had every year of my life) failed to win the Stanley Cup, I finally won my two-year battle with drinking. Looking forward to the Bruins finally coming through for me and my family…