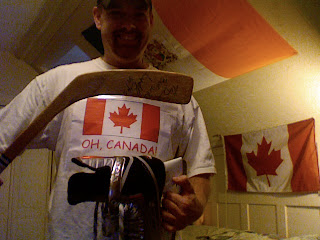 There are a lot of things I love about Canada. Hockey. Prince Edward Island (which includes many other things I love). The lack of gun violence compared to the US. The national anthem. The music. I enjoy Bryan Adams and BNL, but I love Celtic music. And although I love going to see PEI’s Richard Wood (http://www.rwood.ca), Cynthia MacLeod (http://www.cynthiamacleod.com), and Fiddler’s Sons; it is Newfoundland’s Great Big Sea (http://www.greatbigsea.com) and their awesome live shows that really get me jumping and singing.

Even though it was an ex of mine that introduced me to GBS, their music and performances kept me coming back for more. The way they played the traditional song “Mari-Mac” that first night I saw them made my jaw drop and my hands sting from clapping. “Old Black Rum” instantly became one of my favorites, and I knew it wouldn’t be the last GBS show I was going to go to. I have seen them in just about every show they have had in Massachusetts since 2002, saw them in New Haven, CT once, and finally saw them in Canada this summer. The New Haven show was in 2004, when I talked to the guys from The Pushstars (http://davestshirts.blogspot.com/2010/03/t-shirt-85-push-stars.html), but the “Dave almost becoming a sworn enemy of Canada” story happened after the show…

My friends and I left the place (of course, I found an awesome parking spot), and I had to make a left turn to get back on the main road back to Massachusetts. As I made the turn, I could see someone walking out of the corner of my eye. What I didn’t anticipate was this person would be in the middle of the crosswalk when I made the turn, but I still was able to stop the car without any incident. As I looked more closely at the individual, I noticed who it was. He must have heard me screaming “Holy shit, that was Alan Doyle!” to everyone in the car, because he looked back and smiled before I finished taking the turn. I just kept thinking how many people (including myself!) would have hated me if something tragic had happened that night. I’m REALLY glad I didn’t hit you, Alan!

I made this shirt to wear tonight, because Great Big Sea is playing at the Orpheum in Boston. I am going with my friend Tammy (who I believe was there when I almost hit Alan), someone I am glad to say I have converted to the Church of GBS. It should be a rockin’ time!