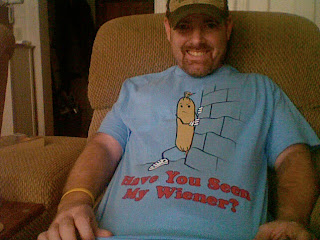 I came across this shirt while shopping for my dad’s birthday at Bob’s (http://www.bobstores.com/index.asp) and thought it would make a funny shirt to wear for the blog.

When it comes to “my wiener”, I have to say that Fenway Franks are my #1 choice. When I was a kid, there was a TV ad for Fenway Franks that claimed when you ate one it was “just like being at the ballpark”. In the commercial, people took a bite of their Fenway Franks and were magically whisked away to Fenway, where they ran into Jim Rice. After seeing the ad, I went grocery shopping with my mom and begged her to buy Fenway Franks so I could be taken to Fenway as well. I was crushed when she tried to explain to me that the commercial wasn’t real, and I wouldn’t be going to Fenway until the next time we had Sox tickets.

One “wiener” tradition that I will never understand is the annual Nathan’s Famous hot dog eating contest (http://nathansfamous.com/PageFetch/getpage.php?pgid=38). With all the things in the world to we can compete against each other, does eating have to be one of them? How would you explain an eating contest to someone who struggles to get food every day? I would rather have people competing to see who could GIVE the most food away to starving people in the shortest amount of time. Could Nathan’s donate hot dogs (or other food) to food pantries for all of the hot dogs they use each year in the contest? There has to be some way to turn what I see as a waste of food into something that can help people…

I tried to find a clip of my favorite “wiener-related” Simpsons moment, but I could only find the dialogue:

Homer: I sure could go for a hot dog right about now...

Marge: Homer, we're at a funeral.

Off to Carl’s for more Crazy Carl Craziness, hope no one loses their wiener!