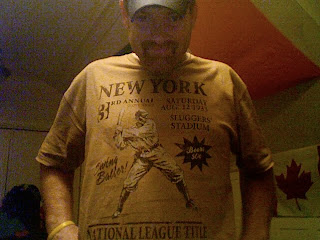 Well, the Sox have been officially eliminated from the playoffs for the 24th time since I have been alive. You think that I might be used to it, but in the last 8 years, the Sox have made the playoffs 6 times and WON two WORLD SERIES (http://mlb.mlb.com/bos/history/postseason_results.jsp).

It’s funny to think that people thought everything would change if the Red Sox ever won the World Series. Yes, since 2004, more Sox fans have been appearing at away games all across Red Sox nation, but I wonder how many of those people rooted for the Sox before that. For me, it still sucks when they lose. And it really sucks when they aren’t in the playoffs and the Yankees (who I like to call the Yank-mes) are. So, what better way to get over the Sox elimination than wearing a New York baseball shirt?

Speaking of this shirt, you might notice a few things….First, there are advertising beer for 50 cents. Now that might excite some people, but calculating for inflation (http://data.bls.gov/cgi-bin/cpicalc.pl) from 1933, that comes out to $8.40 a beer (which is just about right for Fenway, I think). Also, it is advertising a 3rd Annual Glove Night. Does that mean the players themselves are actually using gloves or they are giving away gloves? Finally, like a dork, I checked to see if August 12, 1933 was actually a Saturday (they are always messing things like this up in movies)…anyway, it was (http://www.timeanddate.com/calendar/?year=1933&country=1).

Even with the Sox championship hopes done, It’s easy to wear this shirt because it reminds me of family. My sister Carolyn (a.k.a. #1 shirt donor) got me this shirt with the help of my nephews. So, even though the Sox aren’t playing any postseason games this year, I am thankful for the great and supportive family that I have. That, and hockey is right around the corner…go B’s!