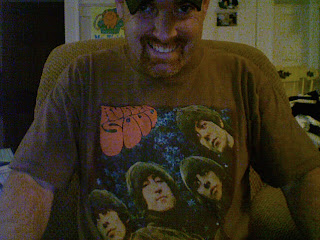 Thanks to my mom and older brother Jon, I grew up listening to The Beatles. Up until the hair metal craze (and Irish music around St. Patrick’s Day), The Beatles were all I listened to. I remember how upset my mother was when John Lennon was shot, and how I was only one of two kids in the first grade (see also: Todd Demma) who actually knew who John Lennon was when it happened. Much like their career, I learned to appreciate the shorter, radio friendly songs first and the longer, “we are rich so we don’t care if the radio plays these songs” as the years of listening to them went on.

It is so hard to pick a favorite Beatles album, but I have to say Rubber Soul is right up there for me. It has Drive My Car, Norwegian Wood, Nowhere Man, Michelle, and In My Life, which are all among my favorite Beatles’ tunes. When I was a kid Sgt. Pepper’s was my favorite, but I think that may have been more of a function of the cool album cover and my brother’s influence.

When my mother wanted to go see The Beatles in concert, my grandmother wouldn’t let her because she thought “their hair was too long”. Luckily for me, my mother told herself she would let her kids go to whatever concert they wanted to (and let me say that the Motley Crue Girls, Girls, Girls tour had a lot more than just long hair to worry about!)…Thanks, Mom!

Whether you like them or not, The Beatles have sold more albums than anyone and have influenced countless musicians that came after them. For me, they opened me up to the world of music and set a difficult standard for others to follow (unless, of course, you were in a hair band that had a kick-ass ballad and/or video!). Rubber Soul will be 45 years old this December, but the songs still resonate with me today. For more info: http://en.wikipedia.org/wiki/Rubber_Soul