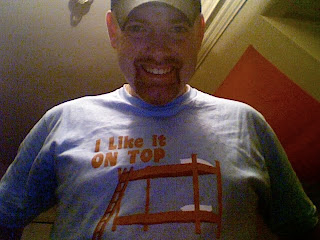 Up until I was 14 and my older brother went away to college, I had to share a room with my brother Tom (it was all 3 brothers in one room until my parents put an addition on the house). Tom and I shared a bunk bed for a majority of our time in The ‘Boro and over the years, it got some mileage. I always had the top bunk, and that proved to be dangerous for Tom a couple of times (in addition to Tom telling me “You were talking in your sleep” many, many times). Once when I was on the top bunk, I could feel it giving way and yelled to Tom that he better get out of the way. Just like Indiana Jones, he spun out of the way just before me, the mattress frame, and the mattress came crashing down. The other time I wasn’t on the bed and it did fall on top of him, but he managed to hold it up enough to make another narrow escape. Luckily both times, he didn’t have a whip or hat to grab on his way to safety. One summer night, we had just gotten back form PEI when I heard a strange sound coming from under the bunk bed. With no idea what it was, I quietly asked Tom if he heard it to (I would describe it as a rustling of some sort). He did hear it, and my plan was simple: I was going to count to three, and we were going to run to our parents’ room. After my dad investigated, it turned out to be a squirrel that had managed to get inside while we were away and our kitchen was having some construction done on it (I guess the carpenters weren’t to concerned about the house door being open or shut). Another burning bunk bed memory was when once again, the top bunk fell through when Tom wasn’t around. Making fun out of our dysfunctional bed, Tom and I propped my mattress at an angle on the top frame and had our very own slide in our bedroom. Our parents were good sports about it, but didn’t buy it when I tried to convince them that we could keep it that way and I could fall asleep at a 45-degree angle. It was worth a shot.

Moving on to college, I picked the one-person loft in the forced triple room of my freshman dorm. My face was about 6 inches from the ceiling, but I had plenty of experience sleeping so high up so I wasn’t too concerned. When alcohol came into my life, the decision to take the bed with the highest altitude proved costly. Luckily for me, I usually had my friend Patrick by my side to make sure I got safely up into the bed. When sophomore year rolled around, I was again faced with the decision of where to sleep. This time, it was an easy one. It didn’t take much convincing for Patrick to agree that the bottom bunk was where I should sleep. However, as my problem drinking escalated, even getting into the bottom bunk was challenging some nights. Again, Patrick was there for me and made sure I at least got back to the room without any incidents. Junior year, I graduated to just a box spring and mattress on the floor. It was the end of bunk beds in my life, and eventually would be the end of my drinking days.

If you have never seen Big with Tom Hanks, you should check it out sometime…”Okay, but I get to be on top!”