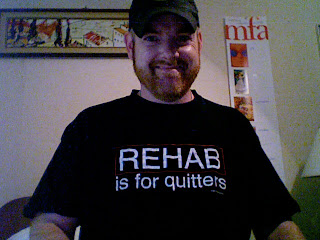 I know like this shirt, I usually joke about my drinking. 15 years ago, on one of the darkest nights of my life, I drank for the last time. I had only been drinking for a little over two years, but I finally figured out that me and alcohol didn’t mix.

I drank for the first time at the beginning of my second semester during my freshman year of college. I (and my group of friends) never drank in high school, but I quickly saw that the social scene at BC revolved around the Mighty Keg. And although I thought drunk people were idiots and Coke Classic would always taste better than beer, I figured I would try it once just to see what all the fuss was about.

My friends and I found an off campus party, paid a few bucks each at the door, and found our way to the keg. After about four beers, I fell in love. The buzzing feeling reminded me of the Benadryl I had gotten in my IV just months before while getting platelet transfusions after my chemo, but I liked it even more. Then, as I sat on a couch and attempted to finish my sixth beer, I threw up on myself. A friend of one of my friends looked over and said to my friend Tim, “I think you friend spilled his beer.” Tim looked over and replied, “I think he spilled his lunch.” I remember apologizing to the guy whose apartment it was telling him it was my “first time”, and he seemed more amused than upset. My other friends Patrick and Chris “escorted” me out of the place and helped me get onto the BC shuttle bus. I recall Patrick giving me a Tic-Tac as we walked down the hill on Comm Ave. As I lay my fuzzy head down to rest that night, I had no idea it was the beginning of my nasty relationship with drinking. My drinking continued just about every weekend for the remainder of my freshman year, and my friends continued to make sure I got home okay.

It wasn’t until my sophomore year that I added vodka to my drinks of choice, a decision that would increase the number of “drinking incidents” I had. I began my own pre-party ritual that assured I would be drunk even before I got to the keg. I would do about six shots of vodka, and chase them with a bottle of Very Fine fruit punch. After the bottle of fruit punch was about half empty I would fill the other half with vodka, shake it up, and guzzle it. It was only then that I felt I was ready to party (see also “Don’t Know How To Party” by the Mighty Mighty Bosstones).

As my sophomore year continued, so did the signs scream that I had a drinking problem. There were fights (well, some dude kicking my face in when I was on the ground), mystery morning bruises, drunken poetry recited to many BC females, ER visits, stitches, a window sill decorated with empty vodka bottles, and ultimately rehab at McLean Hospital. One night (I don’t recall very much), it took about six BC police officers to get me onto the ambulance. As fate would have it, my friend Drew was one of the EMTs in the ambulance that picked me up. Drew told me he was in the back of the ambulance trying to calm me down as we made our way to the hospital. What it turned out to be was an expletive-filled shouting match that made it very difficult for Drew to relay the status of the situation to the hospital over the radio. The best line of the night came from the other EMT who was driving the ambulance:

EMT: Everything okay, back there?

EMT: Well, your friend’s an asshole.

He couldn’t have been more right.

As I mentioned before, I also ended up in rehab during my sophomore year. I was surrounded by people that had serious mental health and substance abuse problems, so it was easy for me to rationalize that I didn’t have problems like them. I remember telling my story about beating cancer and how I started drinking to one of the doctors there. He told me, “Yeah, that’s definitely a recipe to get yourself here.” I said what I needed to say (and the insurance coverage ran out), so I was quickly back at school. This time, my family was made aware of my drinking. They came to visit me, and gave me nothing but love and support. They never raised their voices, lectured, or made me feel bad about being there. All they wanted to know was if there was anything they could do to help. I seriously hit the lottery when it comes to family and friends. Unfortunately, I was still not ready to stop.

Going into my junior year of college, I told myself I was going to “take it easy” with my drinking. So I kept drinking every weekend, but it was “just beer”. I didn’t have any ER visits or fights, and actually had dates here and there. At a legendary (3 floors, multiple kegs) Halloween party at my friend Patrick’s (I went in character as Mickey Knox from Natural Born Killers), I publicly admitted my love to the smart, beautiful, blonde, blue-eyed, Irish girl I had come to know in a few of my psychology classes. I kept on acting like an idiot, but I kept the police out of it.

Then, a friend of mine from high school (who had been diagnosed with leukemia the year before) lost his battle with cancer. He was just days away from being released form the hospital after getting a bone marrow transplant, and he caught something he had no energy left to fight. I was devastated, and so started the questions of asking why I was the one that was still here…

My 21st birthday party featured kegs of Molson Ice and an ice luge shaped like a shamrock. If you’re not familiar with ice luges, they are blocks of ice with grooves carved in them that are laid down on a table at an angle. The point is to pour hard liquor down these grooves to a waiting (and numb) mouth at the other end. The last thing I remember from my birthday was pouring some lethal concoction down the luge, then stopping and finishing the whole pitcher myself. I also went to the Bruins with my Dad the next day and flipped of Mark Messier (see story #2 here: http://davestshirts.blogspot.com/2010/01/intro-and-t-shirt-1.html)

Although I was staying out of “trouble” like I ran into my sophomore year, I still was acting like a jerk when I drank. I said mean things to the people I care about the most, vented about life not being fair, and continued acting like a typical “mean drunk”. One thing was for sure, drinking did not make me happier. It did not make me feel better about my friend passing away, it made my family and friends worry, and it made me care less and less about things that had been the most important to me. It really just made me say “F- everyone, I’m going to do what I want…”

Then on May 7th, in the middle of finals, I set out to drink everything that was in my apartment. I remember being almost finished drinking a case of beer. I don’t remember drinking champagne and wine, but I guess I just didn’t care about anything anymore. I also emptied my roommate’s bottle of pills (Tylenol?), a sure sign I was simply sick of living. Again, my friend Drew brought me to the hospital. When I was medically cleared, I was taken to McLean’s again. This time, it was different…

While I was there, a thirteen-year-old friend I had met in the hospital passed away from cancer. When things took a turn for the worse, he asked his mother if she would call me to see if I could see him for what would most likely be our goodbye. I couldn’t see him because I was getting my stomach pumped of alcohol and pills. Although I’m not sure if I will ever get over this, I know he’s looking out for me. Again, my family was by my side through this all. This time, I was ready to tell them I wanted to stop.

What ultimately shoved me into a different mode of thinking about my drinking was something that one of the other “guests” of McLean’s said….it was something like “Hi, I’m Steve, and this is my 8th time in rehab”. I said to myself “I never ever EVER want to say that.” And I knew there was only one way that would happen: never drinking again. Just like I knew I was going to beat cancer, I knew when I said it and believed it I would neve drink again. The staff at McLean’s insisted that if I returned to BC for my senior year, I would start to drink again. They were wrong. I cannot thank my family and friends enough for sticking by me during my time with alcohol. The love and support you have shown and continue to show me assure it will be difficult for me to ever be jealous of another person. Thank you! And go B’s in OT!