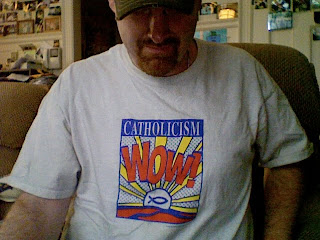 This shirt is from the Kevin Smith movie Dogma, which was released in 1999 (http://www.imdb.com/title/tt0120655/). Like my other Kevin Smith movie shirt (http://davestshirts.blogspot.com/2010/02/t-shirt-48-berserker.html), I got this shirt from the merchandise website (http://www.jayandsilentbob.com/catwowtshir.html), and if you like it, I just noticed it’s on sale for $10!

When Dogma was released there were a lot of Catholics who protested it, claimed it was an attack on the church, and said it was a sin to go and see it. Being a good sport and having a sense of humor about it, Kevin Smith actually went to one of these and protested his own movie:

What I didn’t get then and still do not get today is how people claim their religion is the “right one”, and that anything that goes against their beliefs is something that leads to Hell. The point of Dogma was that no religion is “right” and that having an idea is better than having a belief. I wonder how many of the protesters actually went to see Dogma before they protested it?

I was raised Catholic, went to a Catholic High School, was confirmed, and went to a Catholic College. Today I only go to church twice a year (Christmas and Easter) and when I feel obligated (weddings, funerals, first communions, etc.). Although I recite the sayings and prayers when I’m there, being in Church does not bring me closer to God. I don’t need to be in church to thank God for the great family and friends that I have. What brings me closer to God is celebrating the people I have in my life and trying to help people whenever I can. But some Catholics (and other religious) feel protesting movies and demonizing other’s life choices brings them closer to God. Yeah, good luck with that.

I have often said if the Catholic Church does not wake up and realize what year it is, they are slowly but surely going to lose members and have to continue shutting churches down. I think two simple changes that would help update the church would be 1) allowing women to be priests and 2) allowing priests to marry. But, I am not in charge. I wonder if enough parishioners said they would stop donating money to the church every week unless they did make changes (or had a “Vatican III”), how quickly The Catholic Church would consider updating?

I could go on about issues I have with The Catholic Church, but there will be time later for that…in the meantime if you haven’t, check out Dogma. I assure you, you won’t go to Hell if you do, you will just laugh…