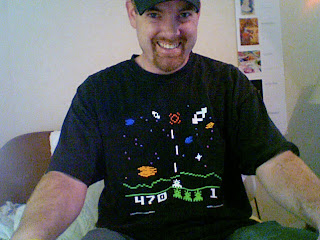 Growing up, one of my favorite places to hang out was my friend Neil’s house. Neil was a good friend with a great family, and we had fun whether we were swimming in the pool or pretending to be Indiana Jones and diving under the automatic garage door as it closed. Another thing we spent a lot of time doing was playing Intellivision. Although not as widely known as Atari, Intellivision had slightly better graphics and a disc instead of a joystick. It also featured a lot of games that you couldn’t get for Atari like Astrosmash. Well, it didn’t take many games at Neil’s before I was begging my parents for an Intellivision for the McGrath household. Finally, on a Christmas morning in the early 80s, Santa came through. See here (look for me in the white and red shirt and notice my sister Megan walking in holding her Annie wastebasket):

I’d like to say my video game playing habits have changed over the years, but they really haven’t. After Intellivision, we got Nintendo (My proudest Nintendo moments were beating Mike Tyson in Punchout and beating Dracula in Castlevania). Then before going to my freshman year of college, I got a Sega Genesis and discovered EA Sports NHL for the first time (it was love at first play). After that, it has been the Playstation series (original, 2, and 3).

Although I don’t play nearly as much as I did when I was younger, playing EA Sports NHL has been a tradition that has continued since I graduated from college. My friend Carl and I have regular “tourneys”, most of which (I hate to admit) he has been victorious. The funny/weird/strange thing is, I really can’t imagine the day where we won’t be playing each other in video game hockey. Win or lose, we just have too much damn fun. And I can’t tell you how many races on Mario Kart Wii I have had with my friend Glen. And very much to my enjoyment, my brothers kids have been bitten by the video game bug.

I think my continued love of video games is like the 70-80 year-olds you see playing chess every day. That was the game they grew up on, they love it, and they are never going to stop playing. I know chess requires a lot more planning/strategy/brain power than video games, but the enjoyment factor (and the fact that you can have virtual fights) will always make playing video games a source of entertainment for my friends and I. I sometimes jokingly use my nephews and niece as an excuse for keeping my skills up, but I know it is just an excuse. A question from my nephew Brendan last year as we played some game pretty much sums it all up: “Uncle Dave, how did you get so GOOD?”

Oh, in case you are wondering where the heck I got this shirt, you can find it here: http://www.intellivisiongames.com/store/. Have a great Saturday everybody, off to Carl’s…