T-shirt #141: THE EMPIRE STRIKES BACK 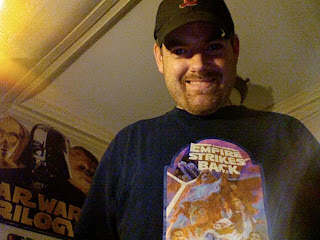 The Empire assaulted Hoth for a while,

And at the end, no one would smile.

So, let me introduce to you

The dork you’ve known for all these years,

Dave McGrath and his Empire shirt…

Sorry about that, just popped into my head. So yeah, 30 years ago The Empire Strikes Back was released in the theatres. Although I wouldn’t see it until a year or so later at The Flick in Westboro (with my friend Jay Fulham…yeah, no idea how I remember this, but I do) it has become my favorite movie. The funny thing is I didn’t like it as much when I was a kid. The ending was a downer, and I simply did not want to believe what Darth Vader said. Like the title suggests, the bad guys win! This isn’t a concept that is easily accepted by the innocence of childhood. Now, Empire is my favorite partly because the bad guys win. Just about every guy I know (and the occasional girl, like my friend Joanne) around my age picks this as their favorite of the Star Wars movies. One of the reasons why I like Kevin Smith movies so much is that he speaks to this phenomena. See scene from Clerks:

But, why do I like Star Wars and Empire so much? Well, the obvious answer is that they weren’t just something I saw for a couple of hours and forgot about…they were part of my life. They were there on Halloween, on Christmas (http://www.youtube.com/watch?v=-sBMS5zu83Q) , and my birthday. They were there when I played with my brothers and when we got our first VCR (and so started the memorization of many, many lines). The first thing I got with my First Communion money was the Darth Vader Star Destroyer toy (The Pope and Jesus would be proud). Lucas created a whole new world for me, and I bought in 100%.

Now, I appreciate Star Wars and The Empire Strikes Back simply as movies that have stood the test of time. I appreciate their messages of spirituality over technology, and seeing the whole universe as connected (And yes, The Force is real. And not in a “make objects move to your hand” real, but there is an energy that connects everyone and everything…call it what you want, but it’s there). I love how real the planets and ships seem and the wide assortment of characters, creatures, and robots. I love the struggle of the unwilling hero (see also Harry Potter), and his journey from innocence to leader. I love the tension between Han and Leia and Harrison Ford’s perfect portrayal of a lovable scoundrel. I love Yoda and the bounty hunters. But of course, the scene that steals it all…Vader and Luke at the end.

I may have sold most of my collection, but that takes nothing away from my enjoyment of The Empire Strikes Back. Besides the toys aren’t what make me happy, watching the movies with my family and friends is what makes me happy. Passing along my love of Star Wars to my nephews and niece is what makes me happy (Speaking of, a few years ago I asked my nephew which of the Star Wars movies was his favorite and he told me Episode I. Although I couldn’t believe it (this is my least favorite by far), I LOVED the reason why it was his favorite: “Because it’s the only one where Anakin is all good”). Tonight, luckily for me, my friend Cailin said she will humor me and watch Empire with me for our usual Friday night movie hangout time. May The Force be with us all…