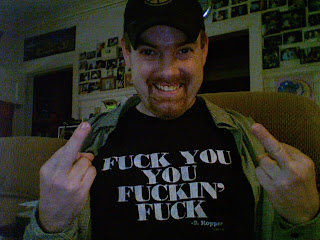 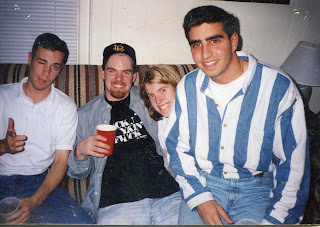 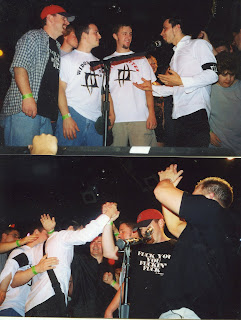 I got this shirt at the Newbury Comics on Newbury Street my junior year of college. It quickly became my “party shirt”, and to this day is one of my favorites. In case you can’t see it, it says –D. Hopper underneath. It’s a quote from his 1986 movie Blue Velvet (http://www.imdb.com/title/tt0090756/quotes ). As you can see from the picture of me at my 21st birthday party (with my friends Joe, Meghan, and Mike), my fashion picks haven’t changed much since I was in college.

The other pictures of me wearing my prized shirt are from a Mourning Widows show in 2001. Nuno Bettencourt (guitarist for Extreme, and one of my idols) invited everyone in the front row up on stage to sing the last song (this was just weeks after my friend Glen was invited up on stage by his idols, U2, at the Fleet Center and played guitar with them for a song (see picture: http://www.u2photos.com/images/fansonstage/010606r3-36.html )

Before Mourning Widows played their last song (with my help), the band’s bassist had noticed my shirt and in between songs he looked right at me and yelled the phrase. My sister, who hadn’t noticed the shirt, had no idea why he was yelling at me until I showed her he was just reading the shirt.

My friend Patrick reminded me of another story related to this shirt…I was in grad school and I had to take the Massachusetts teacher exam. I thought the test was BS and didn't prove you were a good teacher, so I wore this shirt under a long sleeve button shirt as my little silent protest. One the way to the test, I was puling off of the Mass Pike and while reaching to get quarters, spilled my coffee all over my groin area. So, not only did it hurt a lot, it looked like I had a big accident. I got to the school where I was taking the test, and stood in wet uncomfortableness as this guy told us the procedure for the day. When he was done, I went into the bathroom and tried to assess the situation. I thought I could wear my ling sleeve shirt around my waist and the sleeves could be placed over the "accident area", but then I would have a nice F YOU YOU F'N F staring straight at the proctor and other future teachers. I went into the stall and turned my D. Hopper inside out, and strategically tied the other shirt around my waist so no one would think the test had made me piss myself. I didn't get any "looks", but I did have to take the test in some moist nastiness.

I think this one is a keeper…