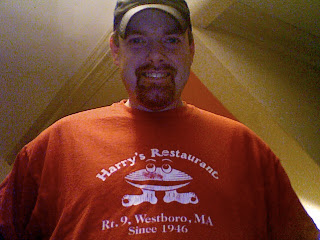 If you’re from The ‘Boro (Westboro), you have probably been to Harry’s on more than one occasion. I myself have enjoyed many late-night snacks, late breakfasts on the weekend, and both pre and post wiffle ball game meals at Harry’s. It was the place to hang out when Friendly’s was closed when I was in high school, the place I met up with my friends during college break, and the place I still go to with my friends when in and around the 100th town.

Speaking of The ‘Boro, I had the pleasure of being part of a radio show The Sports Profs) today hosted by someone I grew up with in Westboro, Leanne. She and her co-host Daren were wondering if anyone was listening, so I emailed the show and told them I was. After Leanne acknowledged she knew who “Tragic Comic” was, she shared a funny Leanne-Dave story that I will share here…

It was our senior year in high school, and we planned to go to a Bruins playoff game against the Buffalo Sabres. I had recently been diagnosed with a cancerous brain tumor and was seeing double, so Leanne offered to drive into Boston. For some reason I can’t remember, Leanne had to leave school early to pick me up. So, I called Westboro High pretending to be Leanne’s father and tell them she had permission to leave. Little did I know, her father had JUST walked out of the office after installing some new phones. The woman on the line said something like, “Oh, that’s weird, because her father just walked out of the office”. I was busted and did the only thing I could do…I hung up.

Leanne and I did make it to the game, and although The Bruins lost (and I was seeing double of the ½ rink from my obstructed view seat), Leanne (non-hockey lover, but great sport and friend) made the game very worthwhile. A man next to us (most likely anti-sober) kept yelling “Kill Svoboda!” like he really wanted a player dead. Leanne knew there was only one thing to do…she joined him, and was screaming “KILL SVOBODA!” for the rest of the game…not even knowing who or what a “Svoboda” was. Thanks Leanne, and thanks for the show today Leanne and Daren…that was awesome.