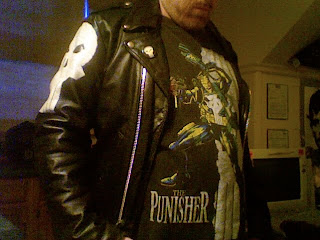 My older brother introduced me to The Punisher when I was in high school, and I was an instant fan. (And my sister Carolyn helped me decorate my jacket).

The short story of The Punisher is that he was a former marine captain (Frank Castle) who took his family out on a picnic one afternoon. They stumbled upon a mob execution, and the mob opened fire on them. Castle was the only one that survived, and The Punisher was born. It is the classic hero born from tragedy story, along with hero still having lingering emotional problems. The Punisher is waging a one-man war on crime, and the rules are simple. If you are guilty, you are punished. No cops, no courts, just getting what you deserve. The real tragedy of The Punisher is that for some reason, they haven’t been able to make a good movie based on him. It’s pretty simple: Man’s wife and kids are murdered in front of him, man goes nuts, man takes law into his own hands. Maybe I should write a script…

For more info on The Punisher, go here: