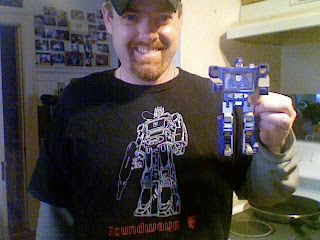 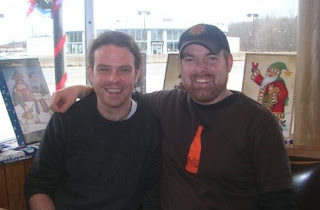 Yes, that robot I am holding is the Soundwave toy that I got for Christmas in 1985. And yes, this shirt is evidence for the cases when one of my friends say “You’re such a dork”. Luckily, I know they are amused by even my dorky shirts, and I don’t really care what anyone thinks about what I wear. I could go on about Soundwave and how underrated he was as a transformer because he was the one that made the energon cubes (http://www.transformers.wikicomplete.info/g1:energon), but this shirt reminds me of one of my best friends, Andy. Before I start writing about Andy, I will let you know that you can read my review of The Transformers movie here:

And if you want, you can read about Soundwave here:

So, this shirt was a gift from my friend Andy (pictured here with me at Harry’s in Westboro…I am wearing my “I’m like a chocoholic but for booze” shirt, see: http://www.davestshirts.blogspot.com/2010/01/t-shirt-23-im-like-chocoholic-but-for.html ) Our birthdays are only a couple of weeks apart, and we started a tradition of going to Newbury Comics and getting shirts for each other for our birthdays. This was one of those shirts. I’m don’t remember which one I got him, but I’m sure it said something inappropriate.

So, what can I tell you about Andy? The simplest way of describing him to people is by saying (and I do this with no shame of my skills) whatever I can do, Andy can do better. He is smarter (Harvard undergrad and PhD), funnier, better at hockey and guitar, and more often than not has caused my female friends to smile, gasp, or say something like (Ooooh, Andy?) when I mention his name (Sorry girls, he has a girlfriend now).

One of my favorite Andy stories happened when we were both juniors in college. Andy was studying abroad in Australia and I was at BC. One day, he later told me, he got this “bad feeling” that something bad had happened back in The States. He called his family to make sure everything was okay, and they had nothing unusual to report. His Australian friends went out that night, but Andy just wasn’t feeling up to it, and stayed in. A couple of weeks later, he got his answer to why he was feeling so down. He got a letter from me with a crude drawing and a date written on the envelope. The date was the day he had that “bad feeling”, and the drawing was of me flying through the air. I had gotten off of the bus that took students to off campus housing, and I was hit by a Ford Bronco when I went to cross the street (see story here: http://www.davestshirts.blogspot.com/2010/02/t-shirt-56-national-sarcasm-society.html ). There are more “psychic” stories related to Andy and his family, but those will come later.

Now, I only get to see Andy about one day out of the year. We usually go to Harry’s in Westboro around Christmas, eat, and exchange presents. Sometimes it upsets me that we don’t get to hang out that often, but it makes that one time a year special. And although one can argue about the evils of the internet, it does make keeping in touch that much easier. Even if for just that one day, he’s another great person I am lucky to have in my life. More Andy stories to come…