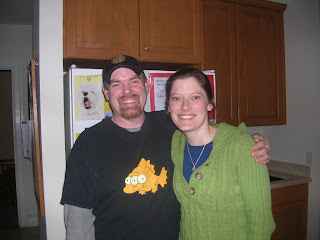 I thought this would be a good shirt to wear for the beginning of my birthday week because it was a birthday present. Also, the information I am getting about Blinky is from another birthday present, The Simpsons first “Complete Guide” book. Finally, I had my picture taken with one of the awesome Hope Lodge guests Angela, who just had her birthday (we had a co-birthday party two years ago when she was here) and came to visit today.

Blinky was first introduced to The Simpsons world on November 1st, 1990. Bart and Lisa caught Blinky in a stream near Springfield Nuclear Power Plant and Marge served it to Burns who was over for dinner at The Simpsons to help his run for governor. In front of TV cameras, he spit out his bite of Blinky and his campaign was over. Blinky also appeared in an episode on September 26, 1991 (Lisa Goes to Washington), seen in a corner of Springfield’s state map. The cool thing about my Blinky shirt is that most people don’t know it’s a Simpsons shirt…just the cool people.

Speaking of cool people, it was a very fun visit with Angela today. She shared her “dream day” of meeting Jon Bon Jovi on her birthday this past Saturday. Her aunt had written a letter to the Mohegan Sun building manager and told him how Angela was a huge fan and about her recent victory over cancer. Angela said everyone was really nice (including the head of Live Nation), and she still has to look at the picture of her and Jon every so often to see that it actually happened. Jon (or JBJ, as his friends call him) talked to Angela for a while and also gave her a guitar pick (which, as a joke, I gave her one of mine right after our picture was taken).