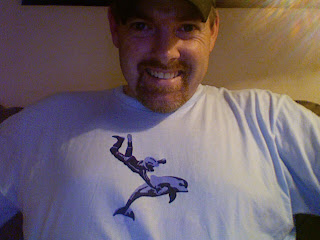 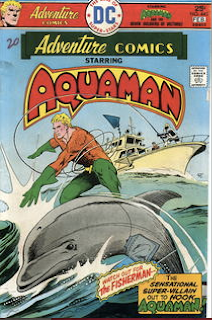 Even Busted Tees (http://www.bustedtees.com), who donated this shirt, isn’t sure what the meaning is. They claim “This is either a Wave Race 64 reference, or our vision of a perfect world” (http://www.bustedtees.com/dolphinrider). I think it’s a weird combination of Flipper and Jet Moto (the Playstation version of Wave Race), but I’m hoping it means something more than that…any ideas?

I did find an ancient Greek story about a dolphin rider named Arion (http://en.wikipedia.org/wiki/Arion), but I don’t think he had the equipment that the rider in this shirt has.

I wondered if I could find a picture of Aquaman riding a dolphin, and interestingly found out that he actually had a romantic relationship with one (a character named Dolphin, not an animal!). Dolphin was a girl taken by aliens and mutated so she could live undersea (typical). After she and Aquaman defeated a common enemy, they entered into a romantic relationship. I never knew Aquaman had a girlfriend OR an ex-wife, but it’s all here: http://www.comicvine.com/dolphin/29-13570

Hey, I did find a picture of Aquaman with a dolphin!

I was looking for a funny Family Guy Aquaman clip, but the quality of the one I found was sub-par. I did find a trailer for an Aquaman movie that doesn’t look good at all. Maybe I should write a live action Superfriends script…

Well, that’s about all I have to say about dolphins, dolphin riders, and people who communicate with sea life. Looking forward to watching disc 2 of Undeclared. Happy Hump Day everyone!