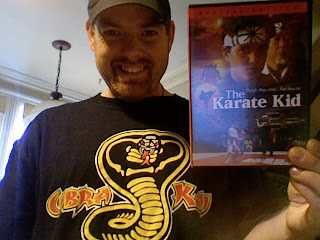 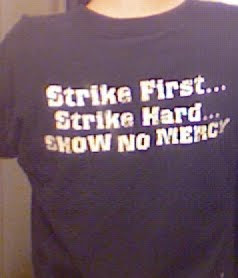 This shirt, which I believe I got at a Newbury Comics, is not the only Cobra Kai shirt I have (see: http://davestshirts.blogspot.com/2010/02/t-shirt-58-cobra-kai-strike-first.html). The funny thing about this shirt is that a few years ago without knowing it, my friend Carl got himself the same shirt. Then one Sunday I walked into the Beacon Hill Pub wearing it, and found Carl sitting at his usual spot wearing the same exact shirt. Of course our friend Scott had a field day with this, and I couldn’t stop laughing about the coincidence.

I wore it today because it is the release of the remake of the classic Karate Kid movie. As a writer, remakes always have me saying “Ugh” and “wtf” and “Seriously?”. I really couldn’t believe it when I heard they were remaking this movie. It had such perfect casting, great quotes, memorable scenes, and a killer 80s soundtrack.

I took my “Little Brother” to Newbury Comics today because he had never been to one. While he was in awe of all the action figures, video games, and toys (just like I always am!), one of the Newbury Comics employees told me he really liked my shirt. I explained my blog to him, and he pointed me in the direction of a manager who hopefully will want to hook me up with some donated T’s from Newburys…I’ll keep you posted!

My one last task associated with this shirt will be dropping off the Karate Kid DVD for my nephew. He mentioned to my brother that he wanted to see the new one, and I will not let that happen without him seeing the original first.

Again, if you don’t know what the shirt is referring to, here’s the scene:

Have a great weekend, and please, DO NOT see the Karate Kid remake. I will burn you a copy of the original if you want! Wax on, wax off!