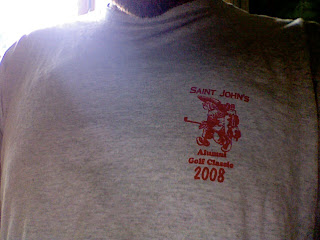 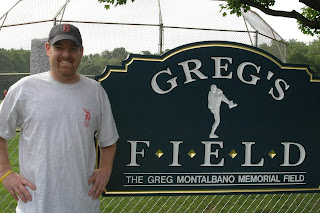 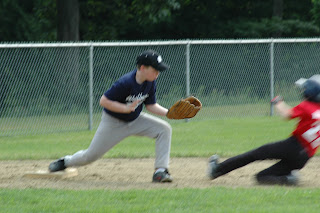 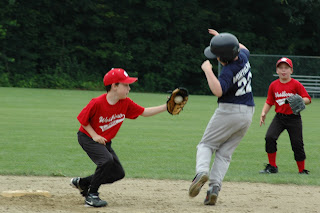 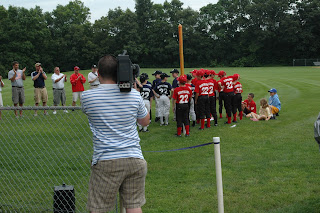 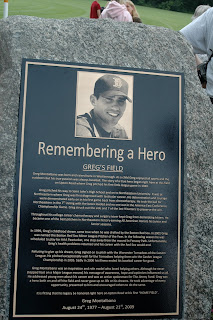 Like my other Saint John’s Alumni shirt (http://davestshirts.blogspot.com/2010/05/t-shirt-135-st-johns-alumni-baseball.html), this one was also from my dad and I wore it in honor of one of my heroes, Greg Montalbano.

Today, they renamed the Little League I (and Greg, and my brothers, and countless other Westboro youths) played on “Greg’s Field”. Before the ceremony my nephew played in a game and like every other player, he was wearing a shirt with Greg’s name and #22. Even though his team didn’t win, he tagged a kid out trying to steal third and stretched a single into a double (he was called out, but the ump must have forgotten the rule that if the player drops the ball, you are safe). During the game, I told my nephew that there used to be a fence at the field. He asked me if I ever hit a homerun, and I told him no. BUT, I told him there was a game I was up in the 6th inning (which is like the 9th) and we were down by 3 runs with 2 outs and the bases loaded. I hit a triple, and tied the game. We ended up losing in the bottom of the inning, but it was definitely my most memorable hit at this field.

After the game, the kids made their way towards the plaque where a crowd had gathered for the post-game unveiling. Following some great words from Frank Desiata (Greg’s Little League coach and Westboro’s Recreation Director), Monsignor Mike Foley (from St. Luke’s in Westboro), and Greg’s sister Kristen, there was a presentation of two of the “Montalbano 22” Little League shirts to Greg’s family…my nephew was one of the players who presented. One of the Little League players also read something Greg had written in the 6th grade about the importance of his family and how he wanted to be a pitcher for the Red Sox. Brandi Phillips, of the Greg Montalbano committee, read a very touching letter written by the Tampa Bay Ray’s player Carlos Pena, who became close friends with Greg at Northeastern. The ceremony closed with Greg’s cousin Patrick Fallon speaking, and he did a great job combining memories of Greg and memories of the field. The Montalbanos then unveiled the beautiful plaque that had been placed near right field, and Patrick read the inscription (below).

A wonderful way to start the day, and an awesome opening of “Greg’s Field”…

Greg Montalbano was born and raised in Westborough. As a child Greg enjoyed all sports and the outdoors but his true passion was always baseball. The story of a true hero began right here at this fiel on Upton Road where Greg pitched his first little league game in 1988.

Greg pitched his way to Saint John’s High School and on to Northeastern University where Greg was first diagnosed with testicular cancer. His determination and courage were demonstrated early on in his first game back from chemotherapy. He took the ball for Northeastern in the 7th inning with the bases loaded and no one out in the America East Conference Championship Game. Greg struck out the side and 7 of the last 9 batters to preserve the win.

Throughout his college career chemotherapy and surgery never kept Greg from dominating hitters. He became one of the best pitchers in Northeastern history earning All American Honors his Junior and Senior seasons.

In 1999, Greg’s childhood dream came true when he was drafted by the Boston Red Sox. In 2001 Greg was named the Boston Red Sox Minor League Pitched of the Year. IN the following season he was scheduled to play for AAA Pawtucket, on step away from the mound in Fenway Park. Unfortunately, Greg’s health problems returned and his career with the Red Sox would end.

Refusing to give up his dream, Greg signed on to pitch with the Worcester Tornadoes of the CanAm League. He pitched exceptionally well for the Tornadoes helping them win the CanAm League Championship in 2005. Sadly in 2006 his illness ended his baseball career for good.

Greg Montalbano was an inspiration and role model who loved helping others. Although he never stepped foot on a Major League mound, his message of awareness, hope and optimism influenced us all. He addressed young men about his cancer and was an active spokesman for The Jimmy Fund. Greg was a hero both on and off the field and never gave up on life or his dreams, He took advantage of every opportunity presented to him and encouraged others to do the same.

It is fitting that his legacy be honored right here on Upton Road at his first “HOME FIELD”.