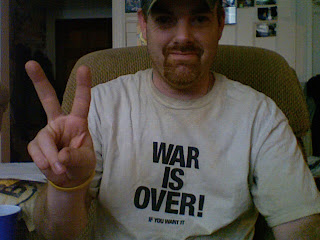 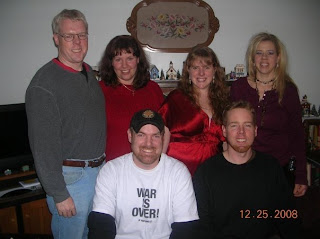 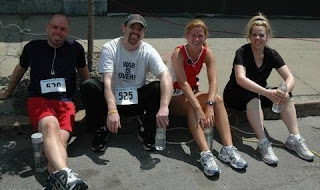 I got this one in the bargain shelf at Newbury Comics. I know it refers to a Christmas song, but I think it’s appropriate for anytime of the year. I did wear this shirt one Christmas (see pictures), but now it has become one of my “workout shirts”…I wore it (and finished!) at last year’s B5K run to benefit pancreatic cancer research and Hope Lodge. I’m wearing it today because my friend Carl and I are getting one more practice in before we play in next week’s Wiffle Fest in Burlinton, VT. Our team name is fittingly called The Massholes…more on that next week.

Like my other John Lennon shirt (http://davestshirts.blogspot.com/2010/03/t-shirt-82-imaginejohn-lennon.html), this shirt promises that an alternate, peaceful reality is not only possible but is easy to reach if enough people want it. I’ve written before that I think the two biggest problems in the world are greed and religion. If people didn’t care about possessions or someone else’s idea of God, what else could there be a war over? It does seem too dreamlike, but it’s true…if enough people wanted it, every war could be over. Enjoy the song, and have a peaceful Saturday!