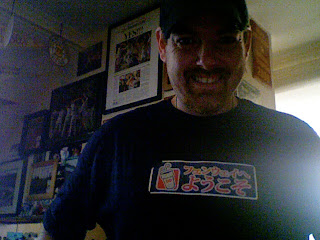 Although I’m not sure how my grandfather would feel about me having a shirt with Japanese writing (I’m hoping he’s met some nice Japanese souls in heaven that have dismissed his prejudice brought on by World War II), I made this one a few years ago when “Dice-K” (Daisuke Matsuzaka) was brought to the Red Sox for the “bargain price” of $100 million. I saw the DD billboard at Fenway, and took a picture of it thinking I would be the only one having a Japanese Dunkin’ shirt. So far, I haven’t seen its equal.

Dice-K, who takes the mound for the Sox tonight, has had flashes of brilliance since landing in Beantown, but I have yet to see anything that has made him worth his contract. So far, here is what he has done:

On the other hand, Dunkin’ Donuts always seems like a brilliant idea to me (even though for my Crohn’s sake I only drink decaf coffee now). According to their website (www.dunkindonuts.com), DD serves more than 3 million customers per day. They have 6,395 franchised restaurants in 34 states and in 2008, their worldwide sales were $5.5 billion (Way to go, nation of addicts!). Here’s to more brilliance by Dice-K tonight, and everyone getting their caffeine fix tomorrow morning! GO SOX!