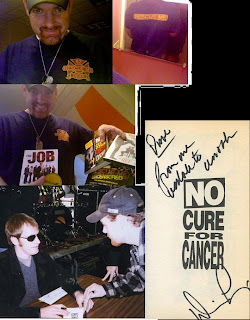 It all started when I was watching MTV’s ½ Hour Comedy Hour. This ranting and raving comic I had never heard of told a joke about the 1986 World Series. He was saying that guys from Boston had a reputation for being mean and unfriendly, and argued that if the Red Sox had won game 6, guys from Boston would be the nicest people you’d ever meet. The comic was Denis Leary and I became an instant fan. I followed him on Remote Control and his MTV spots (see my favorite here: http://www.youtube.com/watch?v=4D3N4COZ4LE&feature=related ), but wanted more…

A few years later when I was ironically finishing treatment for a cancerous brain tumor, No Cure For Cancer was released. I listened to it until I had every line memorized, and had just about everyone in the hall of my freshman year dorm listening with me. I went to see Denis do stand-up at Mechanic’s Hall in Worcester in the spring, and he just made me an even bigger fan. At the end of the school year I performed “Asshole” in a lip sync contest at BC, and took first prize (I don’t think some of the families that had come to see the other college students were expecting a song like that!). Denis’ comedy definitely helped me through one of the toughest years of my life.

Then, came the movies. I watched Denis in Loaded Weapon 1, The Sandlot (great freakin’ movie), Demolition Man, Judgment Night, The Ref (my favorite), Operation Dumbo Drop, Two If By Sea (was lucky enough to go to the premiere of this in Boston), Suicide Kings, The Matchmaker, and Wag The Dog.

In the summer of 1997 I saw Denis live again as he prepared material for another comedy album. My girlfriend at the time didn’t appreciate his sense of humor, a sign that should have told me things weren’t going to work out. Then Lock ‘N Load came out, and I went to see Denis do an in-store musical performance / meet and greet at a Newbury Comics. His best line: “Can we get some more white guys wearing baseball hats in here?” He signed (see picture) my No Cure For Cancer Book as I asked him to, “From one asshole to another” and got a kick out of it when I laughed and told him that the high school he went to, St. Peter’s (now St. Peter-Marion), sucks…I went to the rival and usually athletically superior St. John’s. Again, the man just made me a bigger fan.

Although I didn’t see Denis’ animated movies (Small Soldiers, A Bug’s Life), I continued to follow him in Monument Ave., The Thomas Crown Affair, and Jesus’ Son.

Then on December 3, 1999, something happened that put all those comedy albums and movies into perspective. Denis lost one of his cousins, Jerry Lucey, and a childhood friend, Tommy Spencer, after they were fighting a fire in Worcester. What did Denis do in response? He fought back by starting the Leary Firefighters Foundation (www.learyfirefighters.org). The organization was kicked off by a Celebrity Hat Trick hockey game (see puck I’m holding) which was played at The Centrum (no, I will never call it the DCU Center) in Worcester. My neighbor “Dr. Bob” was offered VIP passes to the event (he treated a relative of Denis), and offered them to me because he knew what a big fan I was. So before the game, my sister Megan and I got to schmooze with Kiefer Sutherland, Scott Wolfe, Cam Neely, Phil Esposito, and Elizabeth Hurley (oh yeah, Denis was there, too!). I felt so lucky to be part of such an important event.

Since he started it, The Leary Firefighters Foundation has given over $10 million in equipment and training facilities to fire departments in Worcester, Boston, New York, and New Orleans. Denis took a tragedy, and made it into something great. He made me take the step of saying “I am a huge fan of this guy” to proudly saying “This guy is my hero”.

Denis continued to be my hero when I watched him in The Job and later in Rescue Me. Three years ago, I started working with cancer patients at the American Cancer Society’s Hope Lodge in Worcester. One night when I told two of the guests that I was going to be watching a show with a guy from Worcester in it, they joined me. Like me, they became instant fans of Denis and we religiously watched Rescue Me every week. Last month Hope Lodge celebrated its 25th anniversary and one of these guests gave a speech to everyone there, sharing her story. I won’t say if there was a tear in my eye or not, but when she mentioned watching Rescue Me with me in her speech, I was glowing.

Tonight, Rescue Me starts its 6th (and allegedly final) season (finally to the reason why I am wearing this shirt today). I am excited and sad at the same time. One thing is for sure though: I am going to laugh. Denis has been making me laugh for over 20 years now and I know there are more years to come. He has made it possible for me to laugh through the tough times and for that I can’t thank him enough. He inspires me to be a better writer and reminds me that anything is possible, even when you come from Worcester. Thank you for everything Denis. You are a hero to me and you are a hero to every firefighter you have helped.