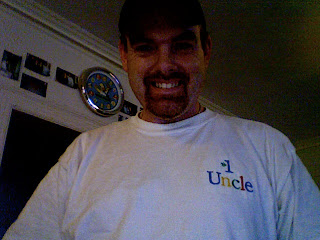 It was November of 1999 when I first became an uncle. I wasn’t the only one who was given this shirt, though. There are two other #1 Uncles: my brother Tom and brother Jon’s wife’s brother Bobby also share this title with me…quite the trio of uncles! I wore it today because my older nephew invited me to his 4th grade end of the year celebration (If there were any other uncles there, they didn’t challenge me to my shirt’s claim). I got to see his work from the entire year, look around the classroom, and watch a slide show video presentation one of the teachers had put together (in one of the nicest school auditoriums I have ever seen!).

Luckily for me between 1999 and today, I have had countless other times that have made me happy and proud to be an uncle (including becoming an uncle two more times, in 2001 and 2003). When my nephews and niece were really young, they liked playing “Star Wars” with me. This entailed each person being a character (I was usually Darth Vader) and trying to keep Darth Vader in “jail”, which was a small area at the bottom of the steps by the door. One time while playing (I think I wrote about this before), I told my older nephew that Darth Vader was Luke’s father. He hadn’t seen the movies yet and only knew Darth Vader was the “bad guy”, so he didn’t believe me. I kept telling him I wasn’t kidding, and he started crying. When my brother Jon told him it was true, he stopped crying and really wanted to see the movies (yes, he has since seen them all).

In addition to playing “Star Wars” I have been an uncle in wiffle ball games, kick ball games, pond hockey games, Wii games, board games, card games, and other made-up games. One time we were playing Mario Kart on Wii and were racing my friend Glen (who had just moved to Oregon) online. If you have never done this, everyone playing gets to vote on what track to race on. Not surprisingly to me, the kids wanted to know “What tracks are Glen’s least favorite?” and were laughing when Wario’s Gold Mine was picked. Yes, the competitive gene has also been passed down!

Like the rest of my family, my nephews and niece have reinforced in me that the only thing in life that really matters is the people you have in yours. They are the perfect cure to a bad day, and a great way to make a good day even better. I love how their laughs reinforce my silliness, and always look forward to the next phone call with the simple question “Do you want to come over an play?”

My nephews and niece are a source of constant inspiration to me as an uncle, person, and writer. In addition to “The Star Wars Kids” children’s book I am working on, they inspired these poems. I may live paycheck to paycheck, but they make my life rich…thanks B, B, and C, I love you!

Of the bad guy.

She took my hand And said,

And burning a memory

Inside this homemade card,

No wish is needed.

Pancake Breakfast With My Family

At The High School Cafeteria of My Hometown

Will stay for a while.

The clock goes to 11

All the rich and sweet

Points to the relatives 7.

Holding onto this sip

As lucky as this

Never running out of dip.