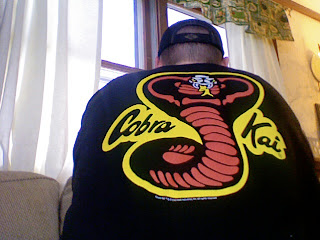 If you don’t know the meaning of this shirt, it means you’ve never seen the Karate Kid…or at least you didn’t watch it as many times as I did. Here’s the info for the movie (http://www.imdb.com/title/tt0087538/) and the clip the shirt refers to is below.

Although not as big as Star Wars, Karate Kid was a huge movie for my generation. My brothers and I often had our own karate “matches” and mimicked the film as best as we could. “Wax on, wax off” continues to pop up in TV shows and other movies. Speaking of other movies, I hope none of you plan to see the Karate Kid remake coming out later this year. Seriously, even if you have kids and they beg you, just show them the original…or show them the original after you see the crap new version. I wore this shirt today because I am hanging out with my friend Carl, who REALLY likes this movie...I won't be surprised if after seeing me wearing it he suggest we watch it...

For all you Gen Xers who loved this movie like I did, here’s some trivia:

• The referee in the final match is Pat E. Johnson, a karate expert and former student of Chuck Norris. He instructed many movie stars in karate. He is credited as the "fight instructor/choreographer" for the film.

• Mr. Miyagi is named for Chogun Miyagi, who became the forerunner of karate-jutsu in Okinawa, Japan. 'Sensei Miyagi' as he was called, created his own style of karate-jutsu, which he dubbed 'Goju Ryu', which means 'hard and soft style'.

• Martin Kove, who played the John Kreese character, was rumored to have replaced Chuck Norris, who allegedly turned down the role of Kreese because he didn't want karate trainers to be shown in an unsympathetic light. Norris has since said he was never offered the role but that if he had been, he would've declined for similar reasons.

• The Karate Kid was the name of a character in DC Comic's "Legion Of Superheroes" who was a member of the Legion. DC Comics, which owned the name, gave special permission for the title to be used. There's a thank you to DC Comics for allowing the use of the name at the end of the credits.

• Elisabeth Shue interrupted her studies at Harvard to be in this movie.

• Pat Morita was initially turned-down for the role of Mr. Miyagi because there was a "no comedian" policy when looking for an actor. He was later given the role because he was best for it after reading.

• The last spin kick that Daniel is hit with before he is saved by Mr. Miyagi actually hit Ralph Macchio and hurt him.

• William Zabka (Johnny) had no martial arts experience prior to being cast in the film. However, he was an accomplished wrestler.

• The scenes in this film where Mr. Miyagi is using chopsticks to catch flies in midair is an obscure reference to the film Bushido (1956) where a very similar scene is used.

• Kyle Eastwood auditioned for the role of Daniel LaRusso.

• The long, continuous shot from the moment Daniel exits the locker room at the tournament until the panoramic view of the entire gymnasium took over 35 takes to get right, according to Ralph Macchio.

• Daniel's original last name in the script was "Webber" according to the DVD commentary.

• The studio wanted to drop the "drunk Miyagi" scene, feeling it slowed the pace down. Director Avildsen argued for it and has felt it was the scene that got Morita nominated for an Oscar.

• Surprisingly, during filming in late 1983, Ralph Macchio was age 22. Some of the cast did not believe him when he was asked about his age.

• The song Miyagi drunkenly sings during the "celebration" of his anniversary is actually fragments of an authentic Japanese folk song that Pat Morita often heard as a child.

• The yellow classic automobile that Daniel polishes in the famous "wax-on/wax-off" training scene, then later offered by Mr. Miyagi as Daniel's birthday gift, was actually given to Ralph Macchio by the producer, and he still owns it.

• According to Joe Esposito, "You're the Best" was originally written for Rocky III (1982) which explains the lyric "History repeats itself". The song had been rejected in favor of Survivor's "Eye of the Tiger".

• During the scene where Mr. Miyagi is drunk and celebrating an "anniversary," he reveals that he served in the 442nd Regimental Combat Team of the United States Army, an Asian American unit composed of mostly Japanese Americans (many of whom had been in internment camps) who fought in Europe during the Second World War and soon became the most highly decorated unit in the history of the American military.

• The football jersey that Daniel is wearing while talking to Mr. Miyagi on the bed is a #89 San Diego Chargers jersey, which in 1984 would have been wide receiver Wes Chandler.

• The "Crane Technique" is fictional and was made up for this film.