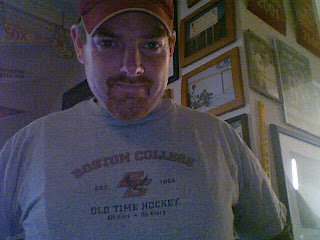 Tonight is the first Monday of February. To most in the world, this means nothing. To many in Massachusetts, it means the first round of the Beanpot Tournament. Tonight marks the 58th time Boston College, Boston University, Harvard, and Northeastern will battle for the coveted trophy (that actually looks like a bean pot) and year-long bragging rights. BU is the Yankees of this tournament, taking 29 of the first 57 that have been up for grabs. My Eagles have won 14, followed by Harvard (a.k.a. “Hahvahd”) with 10, and Northeastern with 4. Even though this year looks like another BC-BU championship match-up, you never know. BC takes on Harvard at 5, and BU plays Northeastern at 8. For more information, here’s the official site: http://www.beanpothockey.com/indexmen.html

Even though I do not know who will win tonight, I do know this: my family is divided on who we root for. As a graduate of Boston College, my allegiance has been set since the fall of 1992. My brother’s wife is a graduate of Boston University, and she very much bleeds Terrier red. My oldest nephew decided at an early age to root for “Uncle Dave’s” team, and is a proud member of Baldwin’s Bunch (the kid’s club for BC fans). Not wanting to be outnumbered, my brother’s wife made sure the younger two children would grow up rooting for BU. She succeeded so much so that one year after watching the Red Sox hit a homerun on Opening Day, my niece shouted “Go BU!”. Two years ago, I was visiting the kids on the afternoon of Beanpot Monday and told my younger nephew I was surprised he didn’t have his BU shirt on for the game. He immediately ran upstairs and was back about 15 seconds later proudly displaying his “Be You” BU shirt. To complicate things more, my brother got a job working at BC a couple of years ago. One might think that having such a rivalry inside a family might complicate things, but I think it brings us even closer. I do not like seeing BU win anything, but knowing it makes a few people in my family happy is a nice consolation. Although when they win against BC, nothing is really a consolation!