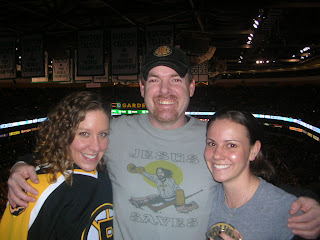 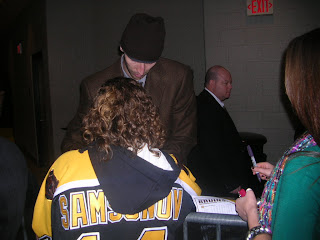 I wore this shirt to the game today in hopes it would help resurrect the Bruins' sorry season. After my beloved B’s jumped out to a first period 2-0 lead, things were looking good. Then, long story short, the damn Canucks tied the game up with less than five minutes left and won in a shootout. Ten losses in a row for the Bruins. Big W, big T, HUGE F!

But, when it comes down to it (and yes, this IS still Dave writing), it’s just a hockey game. It does suck when you are a big fan and your team is struggling, but this game reminded me again that the only thing that really matters in life it the people you have in it.

I went to the game with my friends Leah and Nekelle, and we had a blast (see the smile above of a man at a hockey game with two babes). We watched the game, joked about work, and came up with countless ways to berate Dennis Wideman (my favorite was Nekelle comparing the abilities of her grandmother to his).

After the game we got to hang out with my parents at Legends, and drowned our sorrows in some fine desserts and more Wideman put-downs. We then followed my dad down a “secret hallway” and my friends were able to get autographs from Adam McQuaid and Zdeno Chara. Freakin’ awesome.

Yes, the Bruins are in the middle of a downward spiral. I want them to go on a winning streak, somehow make the playoffs, then come out of nowhere and win The Cup. Whether this happens or not, I do know one thing…Enjoying hockey with my family and friends will always be more important than the game’s outcome. I wouldn’t trade any number of Stanley Cups for the people I have in my life. Don’t get me wrong though, I really, really want the B’s to win a freakin’ Cup…That Cup would be pointless though if I had no one to share the joy with, wouldn’t it?