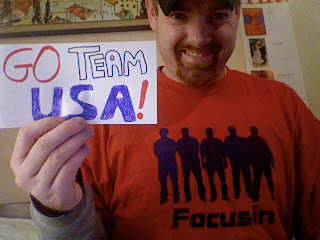 I wore this shirt today because I wanted something with US colors in it…the USA jersey will go on later.

Soooooooo many Focsuin stories to choose from, but which ones can I share? Luckily (or sadly?) I have more Focusin t-shirts to wear, so there will be more stories later. Focusin was formed in 2002 and their name is a reference to a Simpsons episode where Bart takes “Focusyn” to help with ADD:
PIETUBE Poop- Bart Goes on a Focusyn Rampage - The funniest bloopers are right here

My friend Glen was one of their guitarists, so naturally I went to see their first show. I was not disappointed, and “Been Too Long” quickly became my favorite song of theirs. One of their earliest shows was on a Sunday night at a bar called The Midway Café in Jamaica Plain (http://www.midwaycafe.com/). Wearing a homemade Focusin shirt, I was dubbed “#1 Fan” that night. The only show I missed that first year was when I had my first kidney stone (lame excuse, I know).

I wasn’t alone with my high praise of Focusin Rock. In 2003, they competed and won in a national Rolling Rock battle of the bands. They opened for 311, Trapt, Def Leppard, Sum 41, Puddle of Mudd, and Blink 182 at Heinz Field in Pittsburg. I’m not sure on the details of what happened on the limo ride from and back to Boston, but everyone at the show had an unbelievable time. One funny story about this show was when my friend Matt and I were leaving Massachusetts to drive down to Pittsburg. We had been on the highway for about 10 seconds, and got pulled over for speeding...great way to start a road trip...luckily, we only got a warning.

One of my favorite Focusin stories was the time they arranged to play a show at Smith College. It was me along with a few Focusin fanatics and hundreds of Smith College women. The funniest part of the show was when Focusin did their cover of Huey Lewis and The News’ “I Want a New Drug”…not known to the band until after their set list was made, Smith College planned the show as an anti-drug event. Regardless, they still rocked the place.