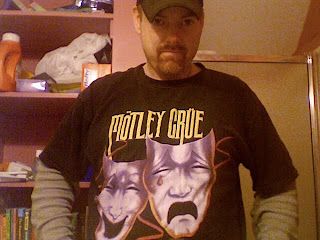 I thought this shirt would be appropriate today because I had what is known as a “Bad Crohn’s Day”…no energy or appetite, in and out of the bathroom all day, cramping, bleeding, medicine only dulling the pain…not fun.

But, Motley Crue is still Motley Crue and I will write about them. They were the first band I ever saw in concert (thanks, Jon!). When my mother was younger and wanted to see The Beatles play, my grandmother wouldn’t let her because she thought “Their hair was too long”. My mother being the awesome mother that she is took the opposite approach and let us see whatever band we wanted to see. Enter The Crue.

It was the summer of 1987, and Motley Crue was touring to support their Girls, Girls, Girls album (being the political activists they were, they sung about the important issues). Another hair band juggernaut, Whitesnake, was opening, so they were really the first band I saw live. Although I enjoyed singing along to the three Whitesnake songs I knew, they really didn’t come close to putting on the show Motley Crue did.

The Crue came out with plenty of pyro, backup singers that were dressed like strippers, and enough sex, drugs, and rock n’ roll for the whole sellout Centrum crowd (it’s still The Centrum by the way, none of that DCU crap).

The highlight for me (which is unusual for ANY concert) was Tommy Lee’s drum solo. His kit was in this huge cage that came out into the middle of the stage and started spinning around and around while he played. It was my first concert, and I have yet to see anything like it since.

The Crue has gone, and come back, and gone again, and come back (their 2008 Saints of Los Angeles CD is pretty freakin’ good), and I’m not sure what they are up to now. They have been in the news, on sex tapes, been declared dead, and written a book (if you were a fan of hair bands, I highly recommend reading Dirt…which I have a copy autographed by Vince Neil thanks to my sister Carolyn…thanks, Ca!)…but they will always be Motley Crue…I will never forget that first show.

Oh, and the song Home Sweet Home was on the Theatre of Pain album…one song even non-80s metal fans can enjoy: