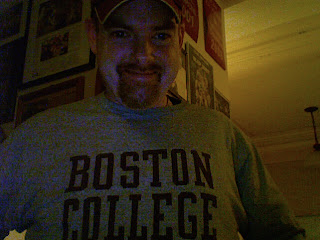 Tonight, for the 21st time, BC will face-off against BU for The Beanpot Championship. Although The Eagles have had two very strong games leading into tonight, those pesky Terriers always seem to bring their A game to this tournament. In my four years at Chestnut Hill, BC won The Beanpot once, my sophomore year. It was an overtime game against top-ranked “Hahvahd”, a game The Eagles had no business winning and only won because of a stellar performance by goalie Greg Taylor. But, we gladly took it.

The win was the second part of a “Holy Trinity” of sports victories my sophomore year. The first was when we beat #1 Notre Dame in football on the last play of the game (http://www.youtube.com/watch?v=lz2SHUmiFp4&feature=related)

The third was when BC beat #1 seed UNC in the NCAA basketball tournament…see SI cover (http://www.sicovers.com/Product.aspx?pid=1035)

Even though The Eagles gave me a lot to cheer about, sophomore year was my worst year academically at BC (see also: drinking problem at its peak). Here is a sophomore year non-sports related story:

Although I was really good at math in high school, for some reason I could not grasp the statistics course I had to take as part of my psychology requirement. I studied a lot for the first test, and got a D+. Then one morning after debating whether or not to go to class, I decided to go and was reading the Boston Globe sports section as I waited for the professor to show up. As I was browsing, I looked around and noticed most of my classmates were reading their notes or the text book. I quickly grabbed the course syllabus and saw we had a test coming up…that day. I had about 5 minutes before class started and quickly scrambled through my notes and the book (which luckily I had actually brought to class). I don’t know if it was divine intervention, but I got a B+ on the test. My fate as a statistician was definitely out of my hands…

Hoping the Eagles can keep this game in their hands and win Beanpot #15….GO BC!!!!