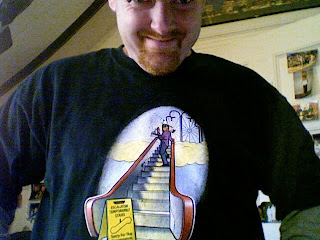 This is a shirt from one of my favorite stand-up comics, Mitch Hedberg. My neighbor Cailin introduced me to Mitch 5 years ago, and I was an instant fan. I remember looking to see if he had any local shows coming up, and being disappointed when I only saw one in New York City. I think it was less than a week later when I heard the really bad news…Mitch had passed away on March 29th, 2005 at the age of 37.

If you want to laugh, Mitch telling the joke on the shirt can be watched here (it’s in the first minute and a half): http://www.buzznet.com/www/search/videos/central/3733123/comedy-central-presents-mitch-hedberg/

Below are some of his more memorable quotes. Thanks for all the laughs, Mitch…

Wearing a turtle-neck is like being strangled by a really weak guy...all damn day! In fact, if you wear a backpack and a turtle-neck, it's like a weak midget trying to bring you down!

My hotel doesn't have a 13th floor because of superstition, but people on the 14th floor, you know what floor you're really on.

My friend asked me if I wanted a frozen banana, and I said 'No, but I want a regular banana later....so, yeah.'

I like escalators because they can't break down. They can only temporarily become stairs.

I saw a human pyramid once. It was very unnecessary. It did not need to exist.

Whenever somebody hands me a flier, it's like they're saying, "Here, *you* throw this away."

If I worked at a grocery store and I saw a duck come in and take a loaf of bread with his beak, I'd let him go.