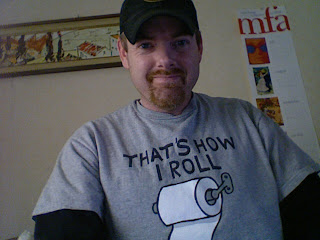 When I saw this shirt, I thought it was the perfect shirt for someone with Crohn’s Disease. I was diagnosed with Crohn’s when I was 14. After being scheduled for an emergency appendectomy, the surgeons found my intestines looking like they were rotting away and removed a foot and a half of my large and small intestine. Then and now, I have tried to deal with it by using humor. How can you not use humor with a disease whose primary symptom is going to the bathroom a lot?

I remember even when I was still in the hospital for my initial diagnosis, my older brother Jon made a joke about the surgeons removing my intestines and if they realized just how many nasty farts had passed through them. It made me laugh so hard, my stitches hurt.

Whenever I was home from college, my mother would joke that she had to stalk up on toilet paper before my breaks from school.

This past Christmas, my nephew picked out a “What’s Your Poo Is Telling You?” daily calendar (www.amazon.com/Whats-Your-Telling-Daily-Calendar/dp/0811866300 ).

But, there’s nothing I can really do to change it…I have Crohn’s and always will. I could choose to feel bad about it and say “poor me”, but that would make the disease control me. Humor is my way of controlling it, and the way my friends and family can talk to me about it. Although I sometimes say I am a Crohn’s Disease sufferer, I prefer to just say that I have it. I have it and for the most part, I laugh at it. That’s how I roll…