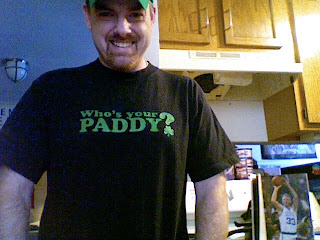 This shirt (a gift from my awesome cousin Katie) would have made it into my St. Patrick’s Day week of Irish-themed shirts, but I already had one that said the same thing: http://davestshirts.blogspot.com/2010/03/t-shirt-71-whos-your-paddy.html. It was the closest thing I had to a Celtics shirt , so I’m wearing it tonight for the game (which will no doubt be on the widescreen TV in the Hope Lodge basement).

The first Celtics shirt I remember having (Lindsey, you’ll appreciate my memory here) was a #00 for “The Chief” I got at a Summer Fair in the early 80s. My siblings and I all used to get the Stop and Shop “Let’s Do It Celtics!” and “Do It Again, Celtics!” shirts (I think that’s what they said anyway!). Then, I’m pretty sure I had one of the “Green Stuff” shirts they made that went along with the Celtics scratch tickets.

I wouldn’t really call myself a Celtics Fan. I’ve only been to one game, but was lucky enough to see the 1986-1987 team play at The (one and only) Garden (thanks, Dad!). I saw Bird, McHale, Parish (The Chief), Ainge, and Johnson (D.J.). It was March 21, and they beat The Sonics, 112-108 (This I know because my dad took pictures and cut out the newspaper article…thanks to my mom for looking this up for me). In my first 13 years, The Celtics made it to 7 Finals and won 5 NBA Championships. I got excited every time they won (and did in 2008 as well), but the pain when they lost didn’t compare to when The Bruins or Sox lost. I didn’t follow them during the season like I followed hockey and baseball.

Still, I will be watching the game tonight and cheering along with the Hope Lodge guests. I may not be a true Celtics fan, but Boston sports are definitely a part of me. GO C’s, BEAT L.A.!!!