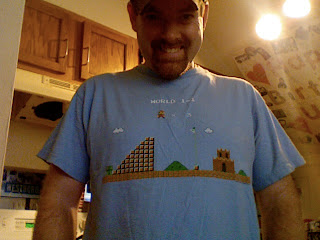 I saw this shirt at Kohl’s for about .42 seconds before I picked it up and decided it would become part of my collection. Although I don’t think I will be asked to appear on MTV’s Real Life: I’m Addicted to Video Games, I do love to play and have been playing for about 30 years now. See my top ten list of video games here: http://davestshirts.blogspot.com/2010/01/t-shirt-2-video-games.html

And my other video game related shirts here:

Super Mario Brothers was the first game I remember talking to other gamers (siblings, cousins, friends) about secrets like warp zones, hidden vines, and ways to get over 100 lives (there was a way to jump on a shell on the stairs to one leve and you just kept bouncing and getting lives until your lives went over 99 and were expressed in symbols…I was able to do this once). My brothers and I actually read Nintendo Power every month to make sure we had all the cheats, codes, and secrets. We played Super Mario Brothers, Super Mario Brothers 2, and Super Mario Brothers 3 (There was a simple “Mario Brothers” game, but it really was not super). If you totaled my video game playing time together, I’m pretty sure Super Mario Brothers would take a large chunk of the pie. And I did add to this chunk a few weeks ago when I played the new Wii version of Super Mario Brothers at my friend Glen’s in Portland (he really had to twist my arm!).

I wore this shirt today because I was planning on playing video games with my Little Brother and my friend Carl. Although my “Little” time has been changed to Sunday, I plan to defend my international video game hockey title and beat Carl with Team France later. I really don’t want to grow up…I AM, and will always be a Toys R’ Us Kid!