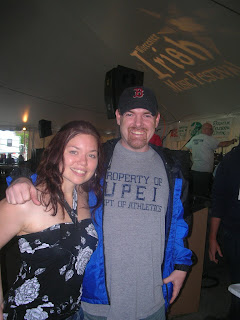 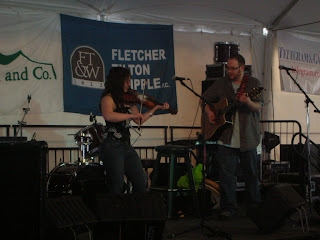 Today, I went with my family to the third day of the Worcester Irish Music Festival (http://www.worcesteririshmusicfestival.com/main/main.html). Although a UPEI shirt is not “Irish”, Prince Edward Island is rich with Irish heritage and has a great Celtic music tradition. Included in that tradition is Cynthia MacLeod (http://www.cynthiamacleod.com/), who played at the festival today and was nice enough to have her picture taken with me for the blog. Cynthia’s musical resume has already been filled with several awards,

Group of the Year with former bandmates Fiddlers’ Sons (2002)

but the reason I enjoy watching her fiddle is because I can tell she has a passion for music and enjoys every minute of it. It was also great to see my niece and nephew step dance along as Cynthia (pictured playing with Jon Matthews) played through jigs and reels. The Festival was a great time, and has me looking forward to being up in PEI this summer…

To check out more of my PEI shirts: