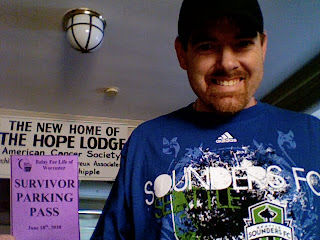 This shirt, for a football (a.k.a. soccer) team in Seattle (http://www.soundersfc.com), was contributed from another awesome Hope Lodge guest (thanks, A!) I’m wearing it today because tonight is the night of Worcester’s Relay for Life.

Did you know the Relay started in Tacoma, Washington? Taken from the ACS website (http://www.cancer.org/docroot/par/content/PAR_1_4_History_of_Relay_For_Life.asp):

One person can make a difference. Nowhere is that more evident than with the story of the American Cancer Society Relay For Life, which began in Tacoma, Washington, as the City of Destiny Classic 24-Hour Run Against Cancer.

In the mid-1980s, Dr. Gordy Klatt, a Tacoma colorectal surgeon, wanted to enhance the income of his local American Cancer Society office. He decided to personally raise money for the fight by doing something he enjoyed—running marathons.

In May 1985, Dr. Klatt spent a grueling 24 hours circling the track at Baker Stadium at the University of Puget Sound in Tacoma for more than 83 miles. Throughout the night, friends paid $25 to run or walk 30 minutes with him. He raised $27,000 to fight cancer. That first year, nearly 300 of Dr. Klatt's friends, family, and patients watched as he ran and walked the course.

While he circled the track those 24 hours, he thought about how others could take part. He envisioned a 24-hour team relay event that could raise more money to fight cancer. Months later he pulled together a small committee to plan the first team relay event known as the City of Destiny Classic 24-Hour Run Against Cancer.

In 1986, 19 teams took part in the first team relay event on the track at the colorful, historical Stadium Bowl and raised $33,000. An indescribable spirit prevailed at the track and in the tents that dotted the infield.

Pretty f’n amazing that one guy started it all. I can’t wait to be there tonight for the Survivor’s Reception (Survivors get treated like royalty at these things which, of course, I don’t complain about), to hang out with the Hope Lodge guests past and present, and to take that Survivor’s Lap. Off to Burncoat to use my Survivor’s Parking Pass…

Oh yeah, I also got 6 more shirts donated yesterday (thanks, JB!) and today one of my favorite Worcester establishments donated one (hint: not my Crohn’s favorite)!