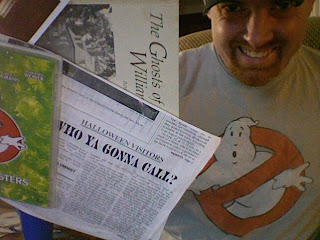 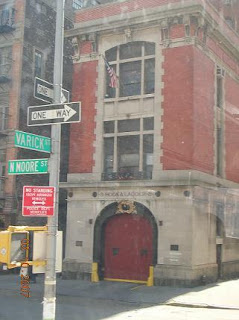 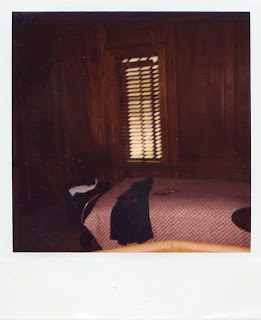 My decision to get this shirt (another Target special) started a while ago. It was the fall of my 5th grade, and Ghostbusters had finally found its way to The Flick in Westboro, MA. Even though it would end up being the #2 box office movie of that year (Second only to Beverly Hills Cop, amazing to see what it beat out: http://boxofficemojo.com/yearly/chart/?yr=1984&p=.htm), my brothers had given it a great review and that was good enough for me. One unlucky mother (I believe it was Todd Demma’s?) ended up driving a station wagon full of ten-year-olds down to the theatre, and for the first time I watched a movie in the front row (not a choice, it was the only row we could all fit in). I will admit now that I did not get all of the jokes in the movie, but I knew (like Star Wars) this movie was not going to be one that I just saw once and forgot about.

Second only to Fletch, Ghostbusters became one of my favorite comedies to watch, watch some more, memorize, and repeat with friends at both appropriate and inappropriate times. In the years after its VHS release into high school, I must have watched it at least 20 times with my brothers, cousin, and friend Mike. There are so many great quotes from the movie it is hard to pick out favorites. Bill Murray as Dr. Peter Venkman is hilarious in every one of scenes. Of course, the pre-teen and teen Dave was a big fan of Venkman’s line: “Yes it’s true…this man has no dick.” (Okay, the “adult” Dave too!) Here are other great Ghostbusters quotes: http://www.imdb.com/title/tt0087332/quotes.

In addition to loving Ghostbusters and long before I saw the firehouse (pictured) they used on a “TV and Movie Tour of New York” I went on with my younger sister, something ghostly happened to me when I was a sophomore in high school. In true Griswold fashion, my family had to change our April vacation plans when we found out (after driving all the way down) Busch Gardens in Virginia was closed during the week at that time of year. One of our alternative stops was Colonial Williamsburg and even though I wasn’t too psyched to be there, I did enjoy reading the book (see picture) The Ghosts of Williamsburg. I read the book as we went house to house and (much to my younger sister’s displeasure) announced to my family which houses were reported as haunted. One particular house we went into had reports of a ghost appearing at the end of the bed in the room that was at the top of the stairs. I took (with my Polaroid) a picture of the end of the bed and although it was all the same color, the wood in the wall looks like it is stained a lighter color in the shape of a person. Who knows what the real cause is, but I have my theory and the picture freaked me out.

I went about 15 years without having another ghostly encounter (but still watching and quoting Ghostbusters), but things I couldn’t explain started happening in my Westboro apartment in the fall of 2005. There were devices that turned on by themselves (TV, iPod dock, oven buzzer, lights), my guitar feeling like it was pushed out of my hands, an orb floating across the room, secure framed posters falling down, unexplained sounds like a huge bird flapping its wings in the kitchen (one that I am glad to say I wasn’t the only one to witness), and the temperature dropping dramatically in isolated areas. Because things began happening after I moved into a different bedroom in the apartment, I asked my former roommate if “anything weird” happened when she was in that room. Her reply was, “Oh, is the ghost turning things on and off?” Information I would have liked to know earlier! After I started sharing these phenomena with my neighbor across the hall, she gave me an add for the Central Massachusetts Paranormal Society that said they would come investigate such things. I called them up, they did an investigation, and I wrote an article (seen in picture) about the whole thing. See their results here: http://www.freewebs.com/cmponsline/CaseFile060713.pdf

Believe what you want, but I know what happened.

Although a few Hope Lodge guests have reported “weird things” (alarm clocks going off when they weren’t set, towels moving from their bed to different parts of the room, a “little girl” trying to wake them up and standing at the top of the stairs), the only experiences I have had are quick shadows moving across a room out of the corner of my eye…nothing like seeing an orb or having my guitar pushed. Luckily none of the current guests have had supernatural experiences, so I am hoping they will want to watch Ghostbusters with me tonight. I have experience with them, and I really ain’t afraid of no ghost…

PS- “The flowers are STILL standing!”