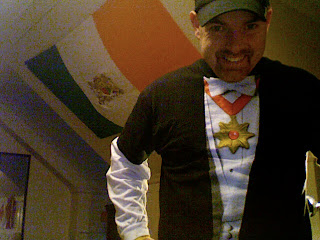 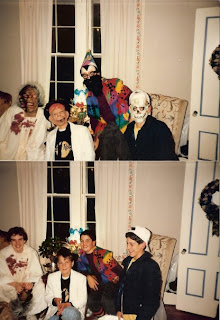 This seemed like a good shirt to save for today, one of my favorite holidays when I was growing up. I think I dressed up like Dracula one year for Halloween and other years I was Darth Vader, a devil, Indiana Jones, a rock n’ roller (see video), and when I was older just a monster mask and a white sheet were enough for me (see picture, I’m on the left with my friends Dave, Adam, and Andy). All of my costumes, of course, were hand made (or put together) – never store bought…thanks, Mom! Back then, we were able to roam all over Westboro as far as our legs could carry us. We Trick or Treated at night without cell phones, and nothing bad ever happened. I would get back to my parents with a brown paper shopping bag (or pillow case) full of candy, and empty into my parents’ living room floor. I would then try and trade with my siblings for as many Peanut Butter Cups as I could, and be proud of the bounty that I had collected. I’m sure kids today would experience fun and safe Halloweens even if they did trick or treat in the dark, but I guess it’s a different world today…

Even with the changes in Halloween celebration, it still remained one of my favorite holidays.

When I was in high school, the church youth group I was in put on a haunted house in the basement of our parish center. My cousin Katie was in the first room dressed as a fortuneteller, and told visitors of the horrors they were about to encounter. In the second room, my brother, cousin, and friend Matt had set up a scene that included a strobe light, scary music, Freddy Krueger (me), and a mad doctor (my cousin) cutting off the arm of a patient (my friend Matt) who had pumpkin guts spilling out of his stomach. It was so upsetting to a lot of young kids who were walking through that some of them started crying and having to leave after the second room. Katie started coming in to warn us whenever a family with real young kids was coming through so we could “tone it down” a bit. We had a great time, and I know we made Jesus proud.

My first year out of college, I was still living with my parents and thought I would assist with handing out the candy. I bought a black hooded cloak and the scariest mask I could find (it was a black skull with purple eyes that lit up). I also got long black fingernails and black makeup to put on my hands. When the neighborhood kids knocked on the door, I opened it, didn’t say a word, and pointed to the candy. One girl from across the street started crying, so I had to de-mask and tell her I was sorry. Still, unlike the days of my youth, we only had about 10 trick-or-treaters.

I was happy when I moved to Waltham that people in my area felt safe taking their kids all over and even to houses of strangers. Kids were usually impressed when I made comments that told them I knew who they were dressed up as. We would also get the occasional teen who was just walking around for free candy. For them, my rule was simple: If you couldn’t tell me what you were dressed as, you didn’t get any candy. Most kids came up with something clever on the spot, so I gave them a break.

We also had a couple of huge Halloween parties when I was in Waltham. Highlights from those include my friend Carl dressed like a woman, my sister Megan as Queen Elizabeth, and when my friend Patrick (Superman) started courting the love of his life Bryanne (Britney Spears)…(I will look for some pictures from these later to post at some point)

I hope everyone had a great Halloween this year, and still lets themselves act like a kid as much as they can!

(My mom said I look upset because I had to trick or treat with my family instead of friends!)