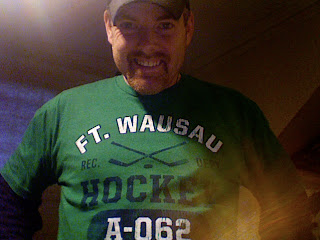 This shirt was donated from my awesome mom, who is celebrating her birthday today…Happy Birthday, Mom!

When I lived in Waltham, I got home one night and my roommate told me she had called. He went on to add, “Yeah, we talked about the Bruins for like a half hour!” It didn’t surprise me at all.


A few years ago, my parents went to a Bruins game and the puck ricocheted off the floor towards them. My father said, “I have the puck” at the same time my mom said, “I’m bleeding.” She was hit in the chin and was bleeding badly. After a stop and bandaging at the first aid area of the Fleet Center, they told my parents an ambulance was going to take them to the ER so my mom could get stitches. Not wanting to miss any more of the game, my mother refused and instead watched the rest of the game holding ice on her chin. After talking to the players she knew after the game, she finally went to the ER with my dad and got the stitches she needed.

Last year after a game I was waiting with my parents to see if we could talk to Adam McQuaid, a Bruins player from Prince Edward Island. After seeing a bunch of the other players walking out, my mom’s cell phone buzzed with a text message. It was Adam telling her where he was. Pretty damn cool and I’ve yet to receive a text message from any professional athlete.

When I was in high school, my mom would let me have a bunch of friends over to watch the Bruins playoff games. We usually packed the family room in, and my friends learned lessons about watching games at my parents’ house. First, if the Bruins scored, you stayed in the seat you were in for the rest of the game (unless of course, the “bad guys” started scoring more). Second, you could expect to be eating “lucky popcorn” during the second intermission. And finally, the most important one of all, it was okay to swear during Bruins playoff games (at the ref, at the other team, whenever appropriate). You can feel free to apply this last one to wherever you are watching important Bruins games.

Another time in the 90s, my mother was grocery shopping and overheard two guys talking about the Bruins game the night before. They were wondering what the commentators were talking about when they kept mentioning the “five hole” over and over again. Their eyes were filled with disbelief when my mom told them that she knew exactly what it was and explained the five different ways you can shoot a puck past the goalie.

I am glad to report that with the help of my wonderful siblings, we made sure for her birthday that my mom would be at the Bruins home opener in a couple of weeks. We all love you mom, and I am glad to have inherited your passion for hockey…Happy Birthday and GO B’S!

For another mom-related blog, please read: