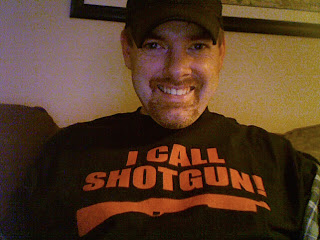 Interestingly enough, this shirt reminds me of when I was a kid. There were 5 kids in our family, and sitting “up front” in the van was something that we all wanted to do whenever we went somewhere. It usually went something like this: My mother would tell us it was time to go. Half of a second later, someone would “call shotgun” but yelling something like “I get to sit up front!” Another half of a second after that, someone else would yell “Front on the way home!”. Of course, there were many fights of who called what first and who got to sit up front last time. As I got older I realized sitting in the back had the advantage of getting away with more, and happily let my younger siblings sit up front.

Now that I’m thinking of rides in the van with all the McGrath kids, I remember one time we were in the Burger King drive-thru ordering lunch. As my mother concentrated on getting everyone’s order correctly, I said “hamburger” loud enough so the Burger King employee could hear it but not so loud that it interfered with my mom trying to get everyone’s order. My mom handed everyone their food and it worked: “Oh, there’s an extra hamburger”, she said. I quickly confessed my secret order and my mom handed it over to me with the “That’s just Dave being Dave” look.

Back to calling shotgun, it wasn’t until high school that my friends and I established rules. Our rule was simple: You couldn’t’ call shotgun until you saw the car we were all going to be riding in. This, of course, led to many races from wherever we were to the point of car-in-eyesight. Calling shotgun in high school was also dependent on who you were with. If it was just “the guys”, you always wanted to have shotgun. If you were on a double date of sorts, it was understood that you’d have a couple up front and a couple in the back. And I am glad to say there were never any real guns involved in the calling of shotgun.

I couldn’t believe it when I found a website dedicated to calling shotgun: http://www.shotgunrules.com. Although the “official” rules differ from what my friends and I practiced, it is pretty extensive and mentions the history of why we call sitting up front shotgun (my shirt is a big hint). And there’s even a book!

Even though I will never own a gun, I thank Foul Mouth Shirts (http://www.foulmouthshirts.com, http://www.wearagun.com/shirtpages/I-CALL-SHOTGUN-T-SHIRT.htm) for donating this shirt to my blog!