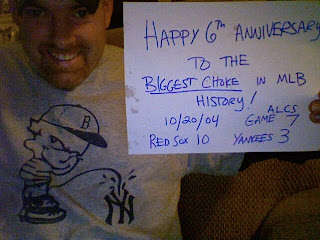 I double dare you to do a Google image search for “Calvin pissing on Yankees”. Go ahead. If you have kids and have “safe search” on, the dare might not seem as daring… Don’t say I didn’t warn you!

Anyway, this shirt was a gift from a Hope Lodge guest (thanks, Melanie!) who said she saw it in Boston and thought I “had to have it”. She was very right.

My name is Dave, and I don’t like the Yankees.

I wore this shirt today because (as you can see from my little sign) it’s been 6 years since my beloved Sox won their 4th straight against the Yankees after losing the first three games of the ALCS. Can you name another team in MLB history that lost a series after winning the first three games? No, you can’t. There has been just one. And every Yankees fan can talk trash all they want about 27 titles and the Sox getting swept last year and not making the playoffs this year and on and on. The fact remains that that 2004 ALCS trumps all of those. I know it still hurts you, and it still makes every Sox fan smile.

I was hoping tonight would be another 10/20 that the Yanks were eliminated, but they managed to keep the series going. It really doesn’t matter though, because I just thought of 2004 and all my worries went away.

Oh, by the way Yankees fans. How do you like it when calls don’t go your way? I know Nick Swisher (right up there with Paul O’Neill in my list of Yankees “faves”) got hit last night, but it was called a ball. Then he popped out, and there were 2 outs instead of only one with another run scoring. See also: Chuck Knoblauch’s phantom tag of Jose Offerman in game 4 of the 1999 ALCS. Sucks, don’t it?

So here’s to the Rangers winning game 6 and making it to their first World Series, even though I will root for either NL team to beat them. Sorry, I just can’t root for Texas in anything!