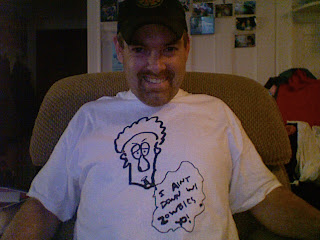 This is the first of 5 shirts donated by Letter from John (http://www.letterfromjohn.com), a site that prints shirts from bathroom graffiti…thanks again, John!

I wore it today because I thought my nephews and niece would get a kick out of it. When I told them where the design for the shirt came from, they thought it was hilarious.

The day with the kids was a fun, funny, and profitable one. We started by Skyping with “Auntie Meg” in NYC, who is skilled enough to work and Skype at the same time. I was made fun of for not knowing the “Tonks” Harry Potter reference for my sister’s future dog…good stuff. After a quick Skype with my friend in Germany Annica (the kids said about 5 words), there was a little outside time. We each took turns taking BP into the baseball net and after lunch it was time to bring in some cashola…

It was a perfect day for a lemonade stand, and I came prepared with cups, mix, a pitcher, and a coffee can to hold the money. The kids made signs and decorated the can, and I made the lemonade. We were all set, and it was time to take shade under the picnic table and wait…

We decided to go with a “name your own price” to see what people would pay, hoping for at least 25 cents. Support from relatives was the key, and they provided 50% of the profits. Neighbors were also happy to stop on their way out for some refreshments and added some bills for the can. We also got a few people we didn’t know, including someone wearing a Westboro High Hockey ’06 shirt.

Some of the reactions of people who didn’t stop were amusing. One guy on a bike said, “I don’t have any money”. When we all shouted “It’s free if you want!”, he continued riding and said “Oh”. Another dude on a motorcycle simply nodded as to say “Yes, you are selling lemonade”. Most surprising was the UPS and USPS drivers who didn’t stop (they were always a sure bet when I was a kid).

In the middle of it, we also witnessed two dragonflies mating. When my niece asked what that meant, I gave her the Chief Wiggum answer of, “You know, making babies.”

When all was said and done, the kids took in $18. The plan is to spend that at Friendly’s tomorrow…looking forward to it!