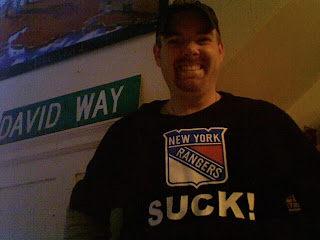 3 cool things about this shirt:

3. I’m wearing it to work tonight

The funny thing is, #3 is almost part of a requirement for my job. And no, my job is not to spread anti-New York propaganda (note to self: look into ways spreading anti-New York propaganda could be a job). As some of you know, I work with cancer patients. I work at Hope Lodge in Worcester (pronounced “Wustah”, as my father assured the luggage dude in Florida during our family trip to Disney), MA. It is a house run by the American Cancer Society and provides lodging to people from all over who are in the middle of cancer treatment at local hospitals.

Although my title is “Night Manager”, I like to think of it more as “Night Keep-The-Guests-Laughing and Counsel When Needed Guy”. And, I know this shirt will make them laugh. Luckily, what also makes them laugh is watching me watch Bruins games. And I know what you may be thinking: You get to wear that shirt and watch a hockey game, and you call it work? I know, it’s pretty awesome, isn’t it? Last night, I played Mario Kart on Wii with a guest and watched football with another. It is fun, and it is rewarding.

There are the “less than fun times” too. Guests usually ask me how I came into this job and I tell them my cancer story. It was four days after my eighteenth birthday, and I was having really bad headaches and double vision. After being examined by the fourth doctor (my eye doctor, two more eye doctors, and finally an ophthalmologist-neurologist), my mother and I were just about getting up to leave. My mother asked him, “Should we just call if his headaches get worse?”

He looked at my file and said, “Headaches?” as if somehow he did not know one of my two major symptoms.

He ordered an immediate CAT-Scan. I remember seeing a sticker on the machine that had a cat looking through a magnifying glass and saying “Don’t worry, it’s only a “cat” scan!”. Reeeeeeaaaal f’n funny, I thought. After about 15-20 minutes of scanning, the technician came into the room, took a headrest piece away, and told me to lean my head back because the doctor wanted more pictures from a different angle.

I knew I was screwed. I knew there was no way the doctor would not want more pictures if there was nothing there. Every swear I knew repeated through my head over and over again. I think I even made a few new ones up, and mentally told the “Only a ‘cat’ scan” cat to f- off many times. Then, I thought of my mother. I knew I was going to have to be strong for her.

As I exited the x-ray room, the look on her face confirmed my thoughts about the second order of pictures. They had found a tumor in the middle of my brain that was pushing on my optic nerve. She was trying not to cry, and I made sure she didn’t. I smiled, and I told her everything would be okay. The weird thing is, I knew it would. I took that moment and knew I could not and would not let my new set of circumstances let me down. Besides, they weren’t even sure it was cancer.

A few weeks later, the doctors were still not sure it was cancer. So, they ordered a biopsy. As I waited with my parents to meet the surgeon, I had to fill out and sign many release forms in order for the operation to be done. One said, “As with all brain surgery, there is a chance the patient may undergo a severe personality change after the procedure”. Without even thinking, I showed this line to my parents and said, “Yeah, you guys wish!”. We all laughed. I had a tumor in my head and we were waiting to see a brain surgeon, and we were laughing.

But, I ended up not needing the surgery. The doctors found a marker in my blood that told them what kind of tumor I had. Bad news, it was cancerous. Good news, it was a treatable kind that responded well to chemotherapy and radiation. Funny news, the cancer cells in my brain were the same kind of cells that are in testicular cancer, proving beyond a doubt that I am a dickhead.

The course was to be 4-6 rounds of chemo followed by radiation. A neighbor of mine, Dr. Thomas (affectionately referred to as “Dr. Bob”), happened to work at the same hospital I was getting my treatment. The day my chemotherapy started, he came into my room to visit me. He told me he had read studies that said cancer patients who visualize during treatment have higher success rates. So, that day, and every other day I got chemo (VP-16, bleomycin, and carboplatinum in case you were wondering), I watched it go from my IV into my arm and pictured it traveling through my veins up into my head and killing the cancer. And I was merciless with my visions. Seriously, the cancer had no chance.

These visualizations and trying to laugh daily, along with the support of my family and friends are the reason I beat cancer. I watched a funny movie just about every day, and eventually had my mother quoting This Is Spinal Tap with me. My family and friends saw there was no negativity or “too bad, so sad” with me and cancer. I’m betting they worried sick privately and with each other, but they did not show it around me.

Don’t get me wrong, there were sucky days. There was the day I was showering and all my hair started falling out. There was the night I couldn’t stop puking, so I drank water just to have something to heave up. There was the day I started playing hockey with my friend and got exhausted after about ten minutes (2 hours at a time until it got dark out was the usual).

But, I made it through. And even made it beyond my doctor’s expectations. After my rounds of chemo were done, my oncology team told me I was done treatment and would not be needing radiation. They had no explanation as to why, they just said it was all gone. And it was. And has been ever since.

Even though sharing my cancer story with guests is on the more serious side of how things usually are at Hope Lodge, it seems to inspire some of them. And, there are parts of it they (and you, I hope, as you read it) find funny. So, I am off to wear this shirt, watch The Bruins game, and hopefully make people laugh. I thank all of you who were there for me then, are here for me now, and took the time to read this…go B’s!!!!

Just need to update that a new guest just asked me to make him a Dallas Cowboys Suck! shirt...sweet!