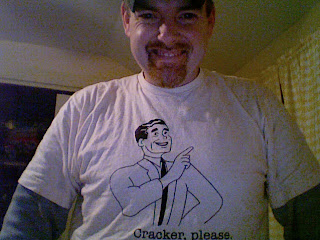 This is a shirt from one of my favorite comedians, Mike Birbiglia.

See the joke it is a reference to here: http://www.youtube.com/watch?v=aRK5rU1ZPJc, and more info about him at his website http://birbigs.com/. What you might not find out about Mike on his website is a few similarities we share. We both grew up in Central Massachusetts (he’s from Shrewsbury), were raised Catholic, were altar boys, and we are cancer survivors. Also, his brother (who he refers to as Joe-Bags) went to St. John’s for two years and was in a few of my classes.

I met Mike last year after going to his Sleepwalk with Me show with my sister in New York City. He put on a great show, and in addition to talking about being raised Catholic and surviving cancer, he talked about how he has a sleeping disorder. He acts out his dreams and at times would find himself doing things like jumping out of hotel windows (that were closed) and waking up to find himself balancing on a shelf in the living room. He’s a hilarious storyteller and a perfect example of how tragedy+time can equal comedy. If you like stand-up, you should definitely check him out. Here’s a great story he tells about his parents and computers: http://www.youtube.com/user/birbigstube?blend=1&ob=4#p/c/30FAF7AD74CBF11B/0/U0wY4wIB5_4

Enjoy, and thanks for all the laughs Mike!