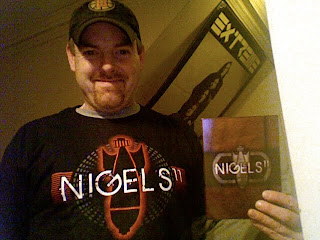 This is one of my newer shirts. It’s from my friend Mike’s band called, you guessed it, Nigels 11. (If you don’t get the reference, you should definitely see the movie This Is Spinal Tap…here’s the clip: http://www.youtube.com/watch?v=ll7rWiY5obI) Along with the shirt, I got their newest CD, Clandestine Operation. As I write this, I am really enjoying the first song, “Get Out”. Check them out here: www.nigels11.com .

I have known Mike for most of my life. I remember the summer during high school when he got his first guitar. He taught himself, and by the end of the summer he was playing pretty much whatever he wanted, including Eddie Van Halen’s “Eruption”. Mike and I often argued as to who was the best guitarist. He thought Eddie Van Halen was the best, while I argued (and still do today) that Nuno Bettencourt was the best. Mike was actually my proof that Nuno was better because he could play Eddie’s solos, but not Nuno’s. Here’s some Nuno: http://www.youtube.com/watch?v=fPhAEVxrrD4

One of my favorite memories of high school was when Mike and I skipped a day to go see Extreme. Luckily for both of us our mothers understood how important concerts were, and covered by telling Saint John’s we had “appointments”. It was a general admission show, and I convinced Mike we should go really early so we could be right up front. The show was at E.M. Loew’s (now called The Palladium), and Danger Danger opened. We got right up front, and the Extreme boys did not disappoint. And yes, Danger Danger played “Naughty Naughty” If you don’t know what that is, it’s classic hair metal… http://www.youtube.com/watch?v=oK1R3JSxvpQ.